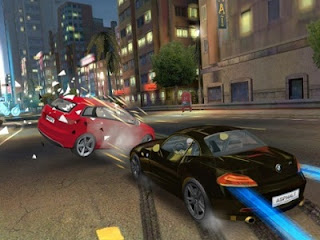 Ubisoft went two from four with its Vita launch lineup (of the games I played, anyway). Lumines and Rayman Origins are up there with the very best games available on the console right now. Dungeon Hunter Alliance and Ashphalt Injection are categorically the worst.

So here’s my experience with Ashphalt: I’m driving along as the sluggish pace that the game engine forces even the fastest cars to chug along to. I’ve “earned” my nitro boost (picking up flame icons that are so big they’re impossible to miss). I activate the nitro. When turbo is activated, the slightest tap on an enemy car will cause them to crash (and earn you a takedown). This one time, I didn’t even touch the racer: the fellow spontansously crashed.

When those takedowns occur, the game cuts away to show you a slow motion cut scene of a bland car model and a bit of broken glass. It’s not that exciting, but ok, yay cutscene. Then the game cuts back to the racing bit. And my car immediately slammed into a wall that the autopilot saw fit to stick me a millionth of a second in front of. 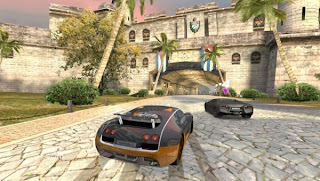 That experience sums up the entirety of Ashphalt: this is a very poorly thought out game. The tracks are wholly uninspiring, and the voice over that introduces each track is painful. Doing well at races earns you money, but there’s nothing to spend it on – new cars only become available by earning stars through doing even better at races, so by the time you can unlock a new car, you’ve got a surplus of money.

Cars don’t really steer that differently, and that’s not a good thing: they’re all sluggish and heavy. Powersliding slows down the cars too much to be a worthwhile asset, so Gameloft decided to force people to powerslide by making it impossible to earn some stars without using it. 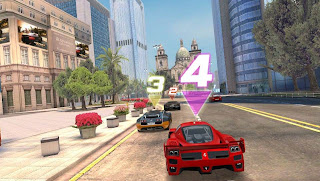 And there’s little incentive to race well; the AI racers have the worst case of rubber banding that I’ve ever seen – worse than even Mario Kart. If you start to fall behind, the enemies in front of you will slow right down. If you get in front, the opponents will miraculously appear on your behind regardless of how fast you’re going. Use your nitro boost, and so will they. It makes for such an utterly pointles experience.

There’s a lot of gameplay modes, but they’re all dull after one run, and in execution they’re all inferior clones to the other racing games that have “attitude” – i.e. Need for Speed.

There’s online too, but finding anyone else to play against is a real chore.

The one good thing that can be said about this game is that the environments, while generic in the extreme, are reasonably well drawn, and popup isn’t too much of a problem. Given there’s both Ridge Racer and Wipeout on the Vita already, though, you’d have to be insane to waste any time with a bland and cheap racer like this.