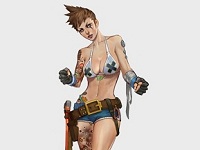 LA-based developer, Kung Fu Factory, is no stranger to the beat-em-down kind of gameplay. The company has already unleashed Supremacy MMA on us, and before that UFC Undisputed. Now it’s going for a slightly different experience; girl-on-girl action in Girl Fight.

Aside from that wonderfully descriptive title, the developers recently showed off some footage of the game at the Game Developer’s Conference, and coupled with the promotional imagery, it’s clear what this game is selling; sex. Or not. Digitally Downloaded sat down with Kung Fu Factory co-founder, Daryl Pitts, and marketing manager, Alex Oliver, who took some time out of their busy schedule to have a brief chat about what the game is really about, and why you should be interested in it.

Digitally Downloaded (DD): It’s clear that this game plays heavily on the sexiness of the girls. In the past, games that have been marketed as “sexy” have failed to win appreciation from gamers or critics. Are you worried that this will give your game a bad initial impression?

Daryl Pitts (DP): No. We think if people play the demo and have fun they will buy it. The design of the girls (and how they perceive themselves) is just one aspect of the backstory.

DD: Why do you think it is so hard for a “sexy” game to be taken seriously when violence is long accepted in videogames?

DP: I don’t really think of us as a sexy game. DOA Volleyball was a really sexy game. We don’t quite compare to that.

DD: The fighting game market is very crowded and very mature. What kind of gameplay tricks do you have up your sleeve to separate this one from the pack? 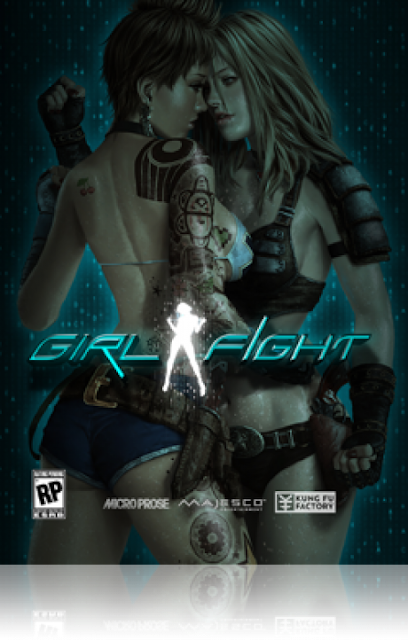 Alex-Oliver (AO): One of our favourite elements of the game is the Psi Amp system. Psi Amps are psychic plug-ins that each fighter installs before a fight. These enable different abilities and open up a lot of strategic options. If a fighter is getting bombarded and is near death, for instance, she can activate the Phase Shift amp and turn invisible briefly in order to recharge health and regain the advantage. But there are also offensive Amps, like Flame Body, which engulfs a fighter in flames and increases damage. There are a lot of interesting ways that the Amps can be used.

DD: What kind of fighting game can we expect with Girl Fight?

AO: Girl Fight is a fun but complex fighter. Players can pick it up and have fun right away, but each character also has a deep move set and their own style. On top of that, the Psi Amp system and countering adds a lot of depth. The system is fun for casual fans but also gets complex enough to get the attention of more hardcore fighting game fans.

DD: How did the game come about? What was the idea behind it, and what inspired it?

DP: We had some free time between our larger scale projects, and wanted to show off some of our new tech and art pipelines, so we decided to publish a small title to show off the results. It was a very fast project with a very small team.

DD: Why did you decide to make it a downloadable game, rather than a retail release?

AO: Shelf space for independent games is, unfortunately, more and more difficult to find. On top of that, we really like being able to be flexible about pricing. We can pass on the savings we get by not having to produce physical copies, so the game’s price stands at a third or even a quarter of what it would have been in the store.

DD: Is this the start of a franchise? Where can you take the idea after this game?

DP: We are already planning on the DLC and the new features for Girl Fight 2.0. Stay tuned!

So there you go; despite the marketing material (especially that “cover” shot!) this is a game that is less interested in selling sex as it is selling a compelling fighting game. It could well be interesting.