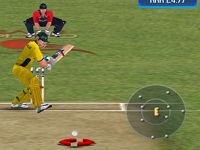 WorldCup Cricket Fever is UTV Indiagames’ newest attempt to create a definitive cricket game for the iPhone. While it uses the same engine as previous games that the developer has released (Cricket T20 Fever, IPL Indiagames T20 Fever, a couple of refinements in this game bring it a step closer to being essential.

Like the previous games, this game is designed for the short and sharp play sessions. Pick a team (players don’t have real names, just silly approximations), pick a stadium, an over limit, and a difficulty level, then get into the game.

On the field, the game controls like you’d expect a cricket game to – you’ll swipe the screen in the direction of where you want to hit the ball, and when bowling, you’ll set the direction and then need to time the run up and delivery. 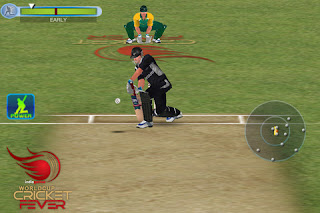 Now, previous games in this informal series have suffered a couple of really nasty problems that have made it almost impossible to be good at the game. When batting, for instance, it was really hard to gauge when to swing the bat, because there was a noticeable delay in the action of swiping on the screen, to the virtual player doing something.

This problem has been removed in WorldCup Cricket Fever. Now there’s a bar at the top of the screen. Somewhere in the middle (depending on what type of delivery the bowler is throwing down) is a “sweet spot.” To hit a good shot, you stop an indicator by swiping the screen. Do it at the right time, and the ball will rocket off in the direction you swiped.

The higher the difficulty level, the smaller the sweet spot, though overall, the game now veers a little too far on the “too easy” side of things, thanks to the slow speed of the indicator. There’s a bit of strategising involved by being able to choose to hit the ball along the ground or into the air (thus risking getting out from a catch, but the payoff is more points), which helps to keep the experience interesting, though you’ll be scoring some unrealistically high scores. 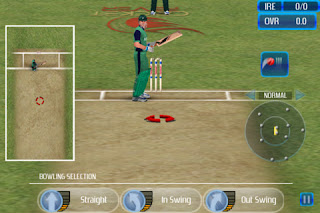 In terms of presentation, WorldCup Cricket Fever looks like the other Indiagames cricket titles – they’re technically decent, but rough and fairly cheap looking. Character models are blocky and jerkily animated, though the ball moves around the field quite smoothly, which is the most important thing.

Game modes are quite thin too, with the game encouraging people to consume it in arcade-sized portions. Defaults for the game are three-over matches, rather than the 50-over style of traditional cricket. That’s great for people who want a quick game to play while waiting for a meeting, but you can’t help but wish for some stat tracking, a real career mode, or something with a bit more depth.

It’s great that there is a nice cricket series on the iPhone and iPad, and Indiagames has refined the model slightly to make this the definitive version. Is it enough to get people that already have one of the other cricket games to dip into their pockets again? Probably not.