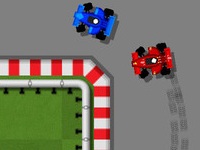 Remember Micro Machines? I would hope so. That little top-down racing game was ace fun back in the day. Indie project, Retro Racing, tries so very hard to recapture that exact magic, but, while it does a good job, it’s not perfect.

The game controls quite comfortable on the iPhone. There’s just a couple of buttons to worry about; this is an arcade racing game after all, but they are comfortably out of the way on the iPhone screen and it’s easy to drive about.

Steering is also fairly comfortable, with a bit of practice. The cars do tend to skid around quite a bit, especially at high speed, but in no time you’ll be zipping around, picking up the various speed and acceleration powerups that are strewn around the tracks, Mario Kart-style. There’s no weapon powerups, but picking up the passive powerups does give just enough of a party atmosphere to the game. 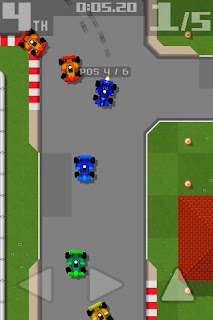 There’s four AI racers on the track in the single player game, zipping around some very short tracks. The first problem is that the AI is faultless, and you’ll need to race really, really well to place well, which is necessary to unlock more tracks. The second problem is that the game is zoomed quite far in, meaning it’s going to take some trial and error before you’re able to navigate around the tracks comfortably enough to be competitive.

Put those together and you have a game that is at times quite frustrating, requiring a lot of grinding and restarts to get anywhere.

But then Micro Machines was never about the single player game, and neither is it Retro Racing’s strong suit. Boot up the game on iPad (it’s a universal app) and there’s an awesome little two player split-screen game which zooms the camera right back (fixing one of the major problems of the single player game), and the short, sharp races are highly competitive and a lot of fun.

The game has a nice visual style with clean, bright cars and tracks. The music is best forgotten. Adding to the value, there’s some Game Center integration for fastest lap times and achievements to earn.

All up, this is a good value little game. Sure it has some problems but a quality multiplayer mode and some simple, quick racing on the iPhone gets you through the public transport grind. For that, it’s an easy to recommend. Micro Machines fans especially should get a kick out of this one.

Trailer: Dungeonland is the most original hack-and-slash in ages