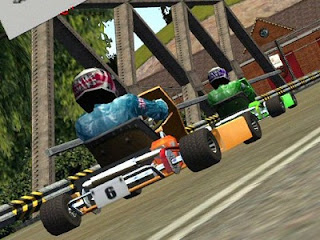 Ahh racing games. The thrill of having the imaginative wind flow through your hair. Turning your controller thinking it has some effect on your driving ability. International Super Karts, released for the PlayStation 2 in 2005, creates a mix between high-powered V8 fueled racing and go-karts, and fails to deliver.

I don’t understand the point of having a racing game that doesn’t handle well. It may be my experience with racing games, or lack thereof, but even if that were the case, I don’t really understand why on the lowest difficulty I’m smashing into every wall as if the game was called International Bumper Karts. When moving fast, and I admit, I’m a speed demon, your turning circle is very wide. Rarely will you be able to make the turn easily, and almost the instant you drive off-road, you spin out facing the direction you just came from.

The courses simply lack imagination. A simple track with some turns and hills. The background details are quite forgettable, with none of the individual tracks being memorable. The only local I do remember is the industrial area as it was replayed over and over and over again on the menu screen. 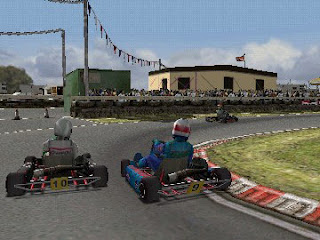 This lead to me having no fun at all while playing this game. It’s boring just holding down the X button, while you drive through generic pixelated environments. It may be the fact that I haven’t played that many racing games, but turning only to do a 180º and getting rammed by your opponents isn’t fun at all.

The AI is decent, the leaders of the pact do a great job of keeping the pace (even on the lowest difficulty). However, and I don’t understand the reasoning behind this, but during championship races, you always start in last place. Though the one thing that I am amazed to see is the results. Instead of once you cross the finish line the race is over, it waits for the rest of the field to complete the race. I don’t know why I love the feature so much, but it adds a sense of realism.

The controls are quite simplistic. You are able to accelerate, brake (which you will need to use a lot). You also have the ability to switch your viewpoint and look behind you. That was where I had the most fun. Driving the correct way, while facing backwards. It was sort of sad that I had to resort to making my own fun in this game, but I simply could not enjoy it. 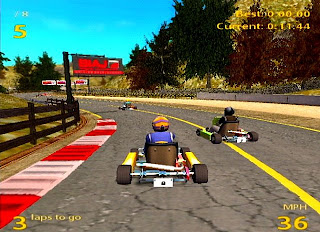 As I’ve mentioned before, the graphics in the game aren’t that great. They work to create the environment but just aren’t memorable. Also the sound is just repetitive and gets annoying real fast.

One of the major issues arose when I booted up the game. Prompting me to connect the controller, I did so to find myself assigned as player 1. Thinking I was connected, I unplugged my cable, only to find I was no longer any player! I have the ability to sit close to my PS3 to play connected with a cable, but I’m sure it would be difficult for many to have the limitation of needing a cable to play with a wireless controller.

This game was simply not enjoyable. Yes it’s a racer and it works, but I couldn’t enjoy playing it. There are so few tracks to play, and none of them are enjoyable to race on. The fundamentals of a racing game should be the enjoyment, but I failed to find any in here.

Star Wars The Old Republic now available down under

Theory: Nintendo’s censorship is hurting the art of videogames