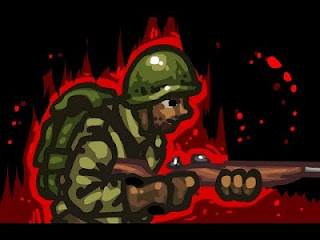 Headup Games’ Deadly 30 came out of nowhere, and though it’s a tiny, throwaway little game, it is a lot of fun.

It’s not going to win any points for originality, though. It’s a side scrolling 2D shoot-em-up, starring three different soldiers in a desperate fight to survive an undead onslaught. There are survivors to rescue, but this isn’t a game that is gunning for story of the year award. In fact, it can barely be bothered even introducing players to the game. Figuring it would be more fun to throw them in the deep end to sink or swim, a few pop-up hints explain the very basic controls, and then the zombies start coming.

There’s some rudimentary tower defense elements, as you can built up a hut to become something of a fortress, and there’s multiple heroes to play with. Each of those heroes has upgradable weapon specialties and there are multiple areas to explore. So it’s not just a run-and-gun action game, though it’s not a strategic masterpiece either. Rather, it straddles a nice balance that’s easy to sit down and tune out to.

The 30 in the name refers to the number of days that players need to survive. Predictably, each day is a little difficult than the last one, but it does keep the game to a nice, reasonably short run time. The game controls nicely, with the pointer responsive to mouse controls. That’s just as well, because like any good zombie survival game, the difficulty of this one can be extreme. There’s a nice day and night mechanic where the night comes with more difficult enemies and the day is the relatively good time to go exploring for the resources to upgrade and repair your fortress. As I mentioned earlier though, the game really throws players in the thick of it; the game starts at night. 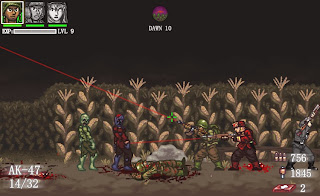 It’s also worth noting that there are only five environments and aside from the kinds of enemies encountered and the background graphics, there isn’t much to tell each environment apart. When the action really picks up there’s a nice visceral feel to mowing through the zombie hordes but the game is limited enough that it might be difficult to see out the full 30 days.

The real strength of this game is the visual presentation though. Deadly 30 looks like a Flash game, but a Flash game designed by real ‘toon artists. The use of colour and the detail on the character models is superb, and the animation is as good as I’ve ever seen on an indie production. The sound effects are perhaps a little feeble, but doesn’t quite sound cheap, either. There’s some humour in the design of the enemies, though I wouldn’t call the game laugh-out-loud silly, either.

That strength is also somewhat of a weakness. This is a game that doesn’t run that well on a standard laptop. Considering the bite-sized nature of the game, I would suggest it doesn’t really belong on a gaming system. I would really love to see this hit the PSN as a mini, or even better, as a 3D eShop download on Nintendo’s 3DS console.

As it is, this is a safe little Steam purchase. It’s a very simple, but ultimately satisfying little shooter game. Retro fans of the likes of Contra should especially get a kick out of this one.