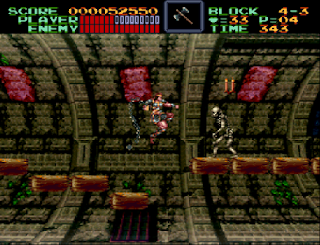 Castlevania may be an old series with established prestige, but the games themselves have anything but a firm identity. Konami has dipped its corporate toe in fighting games, 3D adventures, and God of War-esque action, but the classics are still live and kicking thanks to various digital stores. Most notable among these traditional titles is Super Castlevania IV. It’s mostly by the book as far as sequels go, but it ditches the often heinous challenge of the previous three games for something genuinely fair.
Unlike the huge open-ended Castlevanias of today, this is a traditional 2D sidescroller divided into stages and sections. It also lacks the plot depth of its later brethren, other than the optional opening sequence. This one’s straight to the point and doesn’t bother trying to be anything other than engaging to play.
Armed with your whip and an arsenal of optional power-ups, you’ll slay spooky foes on your way to confront Dracula. It’s nothing you haven’t seen before if you’re familiar with the genre, although it’s worth pointing out that you’ve got a health bar and hearts are used as ammunition rather than recovery.
The game can be challenging, but nine times out of ten, it’s completely legitimate. Simon Belmont is one of the easiest characters to control in a platforming game, and although his movements may immediately come off as stiff, but he’s surprisingly agile. The vampire slayer can whip in eight directions, twirl his whip around, swing from objects, duck to avoid attacks, and toss a large assortment of weaponry at his foes.
I might go as far as to call him the most comfortable character to control in a platforming game. You’re even given a rather generous amount of life. The rest comes down to how adept you, the player, can be in traversing the terrain and various adversaries present in each level. 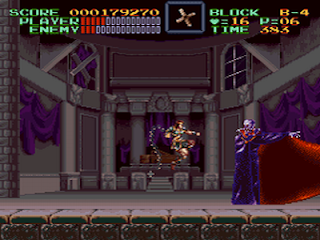 If there’s any real “annoyance”, it’s that getting a game over causes you to have to begin a world from the beginning. Each world contains a good three levels, so some may find this frustrating, but it comes back to how fair the game’s challenge is. If you flub a level, it’s almost always because your skill was insufficient. In the event that you feel cheated, you probably still have the health to deal with whatever foe hit you.
The stages themselves are pretty nice looking for something from the early 16-bit era. There’s a variety of interesting effects used sparingly throughout the excursion, such as one stage that continuously rotates, resulting in a truly inimitable level structure. The backgrounds look simple at first glance, but house a surprising amount of detail. Castlevania IV doesn’t try to hide its age, but instead embraces the SNES hardware and even makes use of the console’s Mode 7 chip (in non-techie jargon, that’s a compliment).
The orchestrated soundtrack is recognizably from the 16-bit era, but it is of such a quality that you won’t even care. The unique, catchy themes help make the levels that much more memorable. If you’re a fan of earlier games in the series, you will recognize and adore the few nods to past games in the Castlevania line.
It may not be revolutionary, but Super Castlevania delivers all the action and intensity fans have come to expect. It’s a traditional platforming game through and through, but a top-tier one. If you’ve never played a Castlevania title before, there’s no better place to start than here.
-Clark A