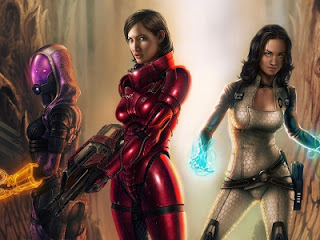 Mass Effect 3 has obviously been a very, very controversial release. Some very aggressive DLC on EA’s behalf has turned what should have been a game of the year event into a game tainted by a massive community uproar.

But what I’ve observed through all this is an overriding sense of community entitlement, and very little understanding of the real reason that has led to these aggressive DLC models that publishers – beyond just EA and Mass Effect 3 – have adopted.

Contrary to popular belief, games are not “expensive” on the publisher’s side of things. The margins involved in game development are actually very, very low. The reason a lot of developers have gone out of business, and the reason that retailers such as GAME are on death’s door, is that no one is actually making much money from these things. Development costs are very high, and developers are competing against themselves, effectively, when a second hand game is cheaper than a new game. Publishers and developers don’t get money from second hand games.

Retailers, meanwhile, are really, really lucky if they get 25 per cent margin on the sale of games at full RRP. Because retailers are under immense pressure on price, and because a game rarely lasts longer than a week at full RRP, retailers don’t get much margin on those sales at all. Unfortunately they have to drop the prices, because a) the competition has, and b) consumers have been taught to believe that sales are good. This creates a self-fulfilling downward spiral that sucks a whole lot of money out of the industry. People who buy a second hand game and then a couple of Cokes, rather than a full priced game, are taking money out of the gaming industry and giving it to Coca-Cola instead.

So, once you dig under the surface, this is actually a very risky industry to be involved in; low margin, little room for differentiation (one FPS franchise goes south, ten rise up to fill the void). Ask any business consultant or financial analyst what they think of that kind of business model. Couple that with the fact that those game publishers and developers with shareholders are ethically and legally required to turn profits, and then couple that with the fact that fans expect each new game in a popular series to be “bigger and better” (and therefore cost more to make) then you’ve got an industry looking for ways to actually make money.

Enter DLC – it’s a relatively cheap thing for a developer to create, thereby guaranteeing the publisher and developer a better margin for the overall product. But why do they do this? Because (and I know there are people that are going to react bitterly when they read this) consumers, as a general group of people, object to supporting the games they like.

The reason the second hand market is such a problem, and the reason that prices on retail games get slashed so quickly, is because gamers, as a broad demographic, simply do not like spending full retail price for games. In a sense, this makes them rather irresponsible, as a core tenant of the very idea of capitalism is that consumers exchange a fair payment for goods or services provided. I would argue it is not “fair payment” to put companies on the brink of bankruptcy when they provide some very popular games (THQ is a good example there).

Am I defending the idea of aggressive DLC policies? No. I believe that Mass Effect 3 has a very poor DLC policy. As a consumer I am not going to buy that game, as is my right. I, however, do believe that we all need to better understand why publishers do what they do. It’s not “greed,” as I often see people accuse game companies of. I can’t think of a single gaming company out there turning over profits that justify the label of “greedy.” It’s not that they really want to milk their faithful gamers. It’s simply that they have few other options, since blockbuster games are massively expensive projects, and if they don’t make a fair return for the investment from somewhere (and the people that buy second hand, on discount, or even pirate the game aren’t going to provide that), then we will get no more games.

In a utopia, there would be no second hand market, and prices for games would remain at the RRP for a longer period of time. Believe it or not, it would also be better if fewer people bought games, but they bought them at the proper price, because that would give developers and publishers a more accurate prediction for game sales when preparing for a big release.

Oh and, when we have a healthy industry with more publishers making fair profits for their investments? We’ll get more new IP investment, and more risky, innovative games. That sounds good to me, for sure!

So now I’ll open up the comments to everyone – what do you think on this issue? Do you believe that consumers have a responsibility in the capitalist ecosystem we call the gaming industry? Sound out below!