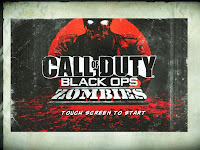 The popular Call of Duty iOS spinoff Black Ops Zombies has been updated to offer even more multi-touch, undead blasting action. And monkeys.

Version 1.2 of the four player zombie shooter has been officially released into the App store and features a new map, achievements, and (most importantly) weapons:

Aside from all that, the update also comes complete with a bunch of fixes that will “give players the best mobile zombie experience yet”. Helping along with that experience, is a totally free (one time) bonus of 5,000 CoD points- that’s set to either get you started from scratch, or re-introduced to the game if you’re upgrading from a lower version.

You can check out the updated version of Call of Duty: Black Ops Zombies right here on the App store and break that new iPad in with some undead style.

Build your backlog with the Xbox Live update