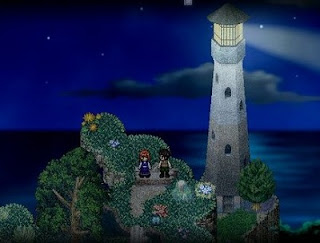 Looking at the screenshots, To The Moon looks like a JRPG. More specifically, it looks like an RPG Maker project. The reality couldn’t be further from that.

This is in many ways the ultimate in indie game development; it’s highly experimental, and as you dig in, the more you realise this isn’t really a game. There’s very little here that’s challenging, and the interactivity is kept right down.

What elevates this and makes it worth a look is the simple fact that To The Moon proves that games can tell compelling stories. This is a beautiful game that should be experienced more than played, but it’s more affecting than just about any game you’ll have played before or after.

It tells the story of an old man who is about to die. Two scientists are brought in to provide the old man one last wish, granted in the form of a dream. The man wants to take a trip to the moon. To be able to grant that last wish, the scientists need to enter the man’s memories, to gain a better understanding of him. 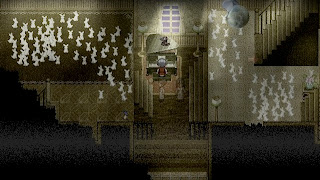 And so it starts; a trip through the man’s past, in reverse chronological order. In practice the game’s structure is simple – play a simple game of hide and seek to track down objects important to the man in each scene, solve a simplistic puzzle, move on to the next memory.

And if we’re being totally honest, the game doesn’t play well. Walls and objects get in the way, lining up characters to interact with objects is twitchy, the characters move at a glacial pace, and despite the lack of action and simple visual style, the frame rate stutters on a medium-quality laptop. It’s clear the strengths of this development team did not lie in programming a game.

But what a beautiful, bitter sweet plot, and what a heartaching soundtrack. From almost the first moment, this game will haunt you. It will have you thinking about mortality, and simultaneously it will fill you with warm memories of your own past, and it will bring back every regret you’ve ever had.

This is the kind of experience that makes you thankful for loved ones, and realise that you haven’t lived enough. It’s amazing that such dense emotions can be conveyed by graphics that are more reminiscent of an era of “you spoony bard,” but there you go. There’s moments of levity, like every heartfelt tale should have, and moments of crushing despair. 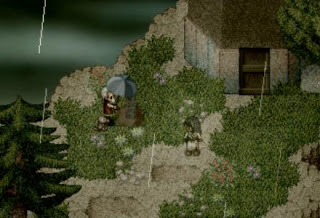 I honestly can’t think of a more powerful or better written story than this game. It’s just as well, because within ten minutes you realise that you’re not going to have your gaming skills tested, and combat is… a joke you’re going to have to play the game to appreciate.

To The Moon is closer to interactive art then a game, then, and as such it’s only going to appeal to a very small niche. But people need to be made aware of this game because this is an indie developer with a real flair for scripting. Someone, please, offer them a full-budget game and a team of programmers to back up their rampart ideas.