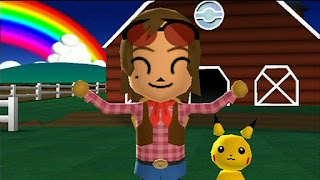 Some would argue that Pokémon is more than a regular JRPG, given how life-guzzling it can be to catch, trade, and train all of the iconic monsters. There are so many variables for each individual animal and some gamers enjoy spending hundreds of hours to create teams that skew the chances in their favour (thus building massive armies in the process). These people are the prime audience for WiiWare’s My Pokémon Ranch, Nintendo’s first Pokémon “game” for the service.
At its core, My Pokémon Ranch is not actually a game, but reasonably competent storage facility for only the most devoted trainers. The problem is that it also tries to be some sort of interactive pseudo-game on the side, leading to a product with no identity, haphazard quality, and seemingly “missing” features.
It’s clear why Nintendo went this route; calling it Pokémon Box 2 and throwing it out for free or a bargain price wouldn’t attract the average fan. Why not try to entice everyone to buy it?
The first problem occurs right when you begin. The player is introduced to Hayley, the owner of the ranch. She wants you to fill the place with the Pokémon you’ve captured in your DS outings. Doing this will increase the size so that more Pokémon can be stored.  Hayley will bring in a denizen every day (which cannot be used in-game, by the way), and you’ll also have the opportunity to trade with her to get modestly rare fighters. In other words, you’re trying to unlock more room to store Pokémon so that you’ll have more room to store Pokémon. What? 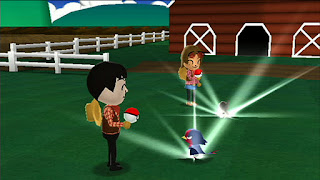 Outside of this, your main distraction is an interactive screensaver. The Pokémon you’ve amassed will play with toy objects and each other. You can grab them and manoeuvre them at your own leisure. It’s mildly interesting to watch for a while, but a casual fan of the series is not going to be won over by this. On occasion you’ll meet up with another ranch owner and get to visit their home, but this only produces more of the same screensaver-like activity. As I said earlier this is a game purely for a very small niche, so if you’re not a breeder, just go watch a video online and you’ll get the complete experience within 15 minutes.
Speaking of niche, it’s probably worth mentioning that you can obtain Mew, the much coveted “unobtainable” legendary Pokémon if you can amass around 1000 critters. While Mew has been distributed a few times, it’s still quite a rare catch and may even warrant the entire 1000 Wii Point investment if you’re dedicated.
As a storage tool, the title is just that – storage. Nothing more, nothing less. It doesn’t help that Pokémon sent from one game cartridge cannot be transferred to another. If you’re restarting your file and want to import your beasts into that game, they will be stuck inside My Pokémon Ranch, serving only as a number to increase the population of your ranch. It would be acceptable to keep them at bay until completing the adventure again so you cannot cheat (though the games have a system in place to impede that anyway), but instead it elects to be an incompetent transfer tool and only meant for storage. 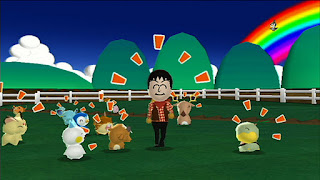 It’s also worth noting that this review is being conducted in 2012 rather than 2008. Why is this relevant to the game’s quality? Many new Pokémon titles were released after Diamond and Pearl, including Platinum, Heart Gold/Soul Silver, and Pokémon Black/White. Unfortunately, the game was not well updated outside of Japan, so the newer games are largely incompatible. Even if you’re in the market for a good storage tool, it might be utterly useless.
If any aspect of the game screams effort, it’s the visuals. The graphic designers painstakingly assembled 493 new models of these monsters (plus alternate colors for each) and managed to squish this into a 40MB downloadable game. That 40MB limit does rear its head though, since the creature designs trade any real detail for “artistic flair” via polygonal chibi character models.
While My Pokémon Ranch is largely an exercise in both futility and redundancy, it can still provide a service for hardcore Pokémon players. Other than that, it is little more than a fast and expensive way to get some extra space on your DS cartridge.
-Clark A

Rage on your Mac