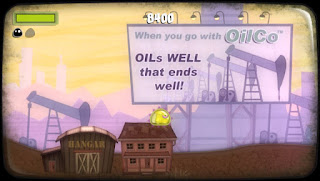 When you stumble upon a game called “Tales From Space: Mutant Blobs Attack!!!”, your expectations don’t exactly soar. Aside from the muddled imagery, flinging around more than one exclamation point is a safety hazard. Yet despite this name, the game doubles as the most inventive 2D platformer I’ve played in years and Vita’s first must-have digital exclusive.
Contrary to what the convoluted title may imply, you’re no hero fighting off hordes of aliens. Rather, you take control of a mutant blob whose sole purpose in life is to devour everything in its path. I really do mean everything; pennies, teeth, canned food, helicopters, buildings, and high school graduates are just a few candidates for consumption.
Your excursion begins as just a wee dribble, no more than a couple of centimetres in height. As you continue to consume objects, however, your blobbiness multiplies and you become bulky enough to devour entire human beings and scale buildings in a single leap. Possibly the most amusing part of the entire experience is watching the villainous glob of goo evolve from the size of a dime into a planet. The game keeps track of your height (using the metric system – sorry, Americans) in the upper right corner, as growth is mandatory for solving puzzles and being able to consume large objects.
Speaking of which, this is a rather dextrous adventure, at least in the context of the platforming genre. Not a single level in the game is a linear left-to-right side-scroller. Instead, you’ll find yourself travelling all over the map and revisiting areas you’ve already been to. Even the action segments of the game require you to put on your thinking cap so you can maximise the points you collect. 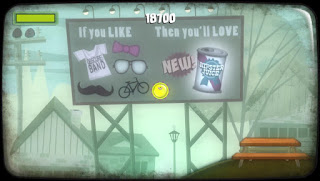 When not hunting down obscure morsels, the globule is also capable of wall jumping, pushing objects, stomping on foes, squishing to reach narrow passages, and even committing suicide on command.     Since you’re playing as a blob, though, jumps have noticeably more float to them than the standard 2D hero. This can be used to your advantage when trying to aim and squish yourself into high-up crevices. On occasion, you’ll also get to use a jetpack and the power of magnetism to solve various puzzles.
It’s rare to see such an agile fellow in a platforming game, let alone maintain a semblance of challenge with so many abilities on offer, but Mutant Blobs Attack has possibly the most balanced difficulty I’ve seen. You’re rendered very mortal by your life bar and are susceptible to being squished, but you have an infinite stock of lives to pluck from and save points are plentiful. Consuming items in the stage also adds to your health, so you’d have to be truly inept to fall to the standard enemies. The puzzle sections in each stage thankfully only test your wit and not your patience – this isn’t a game you’re likely to get stuck in.
There’s still plenty to do after completing the sufficiently lengthy 20 levels. Two bizarrely coloured blobs are hidden in each stage and need to be collected to claim 100% completion.  Similarly, each level has a score quota that, should you reach it, rewards you with a gold or silver medal for your efforts. There are also optional levels that ditch the game’s traditional control scheme in favour of gravity-free tilt sessions. If you’re one to replay stages over and over, you’ll be glad to know there’s an online leader board (and a fairly active one at that).
What really gives the game its soul is the dry humour. You can tell nothing is taken seriously, from the silly background advertisements and subtitle-free babbling human speech. The cartoony art style accentuates the wit, and I found myself growing fond of it despite being turned off initially. There’s not a whole lot in the way of music, but the tunes there are catchy enough to serve the purpose of a soundtrack. 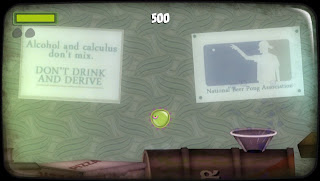 The few quibbles I have are fairly minor. On occasion, the touch controls can get a bit cramped when there are multiple objects that need to be dragged, all annoyingly in the same area. Those with obsessive compulsive disorder will be infuriated by some the fast moving sections, as they tend to leave high scores borderline unobtainable without hundreds of tries.
These people also be annoyed that there’s no real indication of when a level ends; you’ve got to judge for yourself when to progress knowing you could be leaving score behind. Least of all your worries is that cutscenes will be skipped simply by touching the screen, but this is nullified by the option to view them again from the main menu.
All said, there’s little excuse not to download Tales From Space: Mutant Blobs Attack. DrinkBox’s second effort has the most content you can get for such a cheap price and what’s there is positively golden. Like the main character, you’ll find yourself more and more addicted as the game goes on.
-Clark A