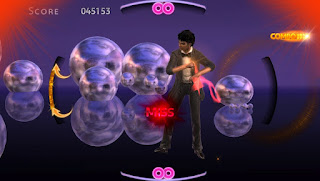 Regardless of your opinion on the man, it goes without saying that Michael Jackson made his mark on the music industry in a big way. It’s logical, then, that Ubisoft would carry on the torch by releasing Michael Jackson: The Experience on as many gaming devices as humanly possible. Or…perhaps it’s just a cash-in using tons of pre-existing material and an icon’s name to sell the product, but at least this Vita entry is mildly competent.
Michael’s back again for another rhythm game with all his moves intact and it’s your job to execute them. Arrows appear from all sides of the screen and you need to slide or tap in the appropriate direction accordingly to rack up a good score. Mid-song, you’ll also get to watch faithful recreations of segments from his music videos and do some freestyle dancing. When it works, it’s almost embarrassingly fun.
Yes, when it works. The biggest gripe I had with the game was finding a comfortable way to play it. While you only need one finger most of the time for the easiest difficulty level, there are segments in the latter two that require you to use two to four fingers very quickly in a multitude of patterns. Unfortunately, this is made rather difficult when your digits are moving rapidly and blocking the arrows that appear everywhere in the process. The game suggests a few positions in the loading screens, but all of them end up blocking the screen in some way. Using your thumbs on the outer edge to conserve screen space almost works, until you need to execute spinning manoeuvres. 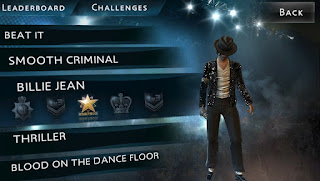 The best configuration I could get into involved staring face down at the Vita on a flat surface and bending my index fingers like cranes. I have difficulty imagining this being an effective portable game as such (at least if you intend to get anywhere near perfect scores and earn trophies). Your experience may be more relaxing than mine, but I still feel slightly sore as I’m typing this. Long story short, it would have been infinitely more effective to just have all the moves in one central location, rather than spread everywhere akin to the hours on a clock.
With that out of the way, what’s the most important part of a rhythm game based on a man’s musical career? The music selection, of course. The Experience HD offers fifteen tracks from the get-go, all taken from various points in Mr. Jackson’s career. Aside from the obligatory hits like Billy Jean and Thriller, there are quite a few obscure ones to hold the balance. Granted, there are fewer tracks than the console versions and you’ll probably want to check out the list before you buy, but there’s still a decent variety.
Rather fitting is that Michael appears in each song as he would have in real life at the time, complete with the appropriate attire. If you’ve watched Michael Jackson’s Moonwalker, you’ll be familiar with the scenes used for several of the songs, namely Smooth Criminal. You also have my condolences. His CGI depiction does an admirable job of imitating the real Michael’s moves – moon-walking, crotch grabs et al. 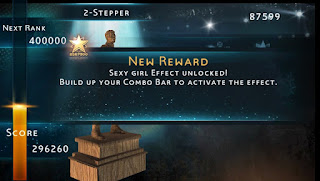 What’s somewhat confusing is how many unlockables there are in the game. That’s not a fault in most titles, as new content helps extend your playtime and encourages you to try things as they appear, but basic features should not be locked. For example, you need to unlock the ability to score perfect timing on a song. Granted, this can be done within only a few songs, but why something so instrumental to getting a decent score starts out locked I’ll never know.
There’s also a multiplayer mode that appears to be the same as the main game, albeit with players competing for the top score. The problem here is the lack of online play or at least single cartridge/single download play, so you need to find a friend that owns the game as well. If you can actually do that, congratulations, you get to unlock more content.
Michael Jackson: The Experience HD is more of a guilty pleasure than a must-own rhythm game. It has several glaring flaws, but fans of the musician should still get good mileage from the modestly voluminous track selection.
-Clark A