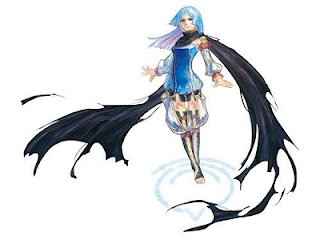 Malicious is what happens when you take two of Japan’s most popular game franchises, and shove them into one game, But somewhere this game went horribly wrong and the result is a game that is… horrible.

It takes the basic idea of Dynasty Warriors (press square a lot to defeat hordes of enemies) and meshes it with the epic monsters of Monster Hunter. So the game works like this – from a central hub, you’ll pick one of five (yes, just five, but we’ll get to that in a second) stages. In that stage (really just a Colosseum with a couple of bits of scenery) is a gigantic boss, and a whole bunch of little enemies.

You’ll kill the little enemies, which earns points which can then be spend to either heal your avatar, or unleash powerful effects. You have 30 minutes to take down the big boss. 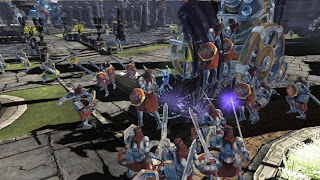 To make life a little easier, there’s a range of attack options you have. You start out with just some basic fist attacks, and a weak ranged attack. Taking down bosses grants extra abilities, which in turn allows you to take on tougher bosses. Make no mistake, though this game allows you to pick the levels in the order you’d like to take them on, the game goes from being quite easy to brutal if you try and take them on in an alternate order to the default.

The game also tries to help you out. Your character, being the athletic sort, will largely autojump over small obstacles. After all, having to manually jump would be a distraction from the ultra violence, right? So, aside from a camera that likes to be wonky from time to time – especially when you engage the auto-target on the minions and the game picks random ones behind you for your next target – your only job in this game is to mash those buttons and take down those bosses. 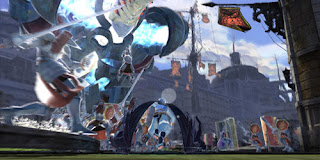 And button mashing this game is indeed. Bosses are universally one or two-note, making the strategies to take them down painfully obvious from the first minute or two of the game. I’m by no means an expert at Monster Hunter, but for me the joy of that game is in working out the weaknesses of each of the monsters. With no weapon and armour crafting, and combos being incredibly easy in execution (even more so than Dynasty Warriors), this game is not taxing in the slightest on the brain.

And indeed, it might well put players to sleep. Once the basic strategy to defeat the boss is figured out, the mind numbing process of repeating that tactic 10 or 15 minutes until the massive boss health bar is depleted begins. You play on autopilot, and the game just runs through the motions. 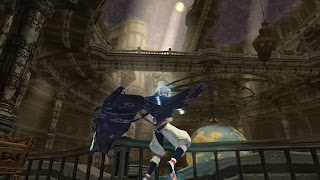 What’s so tragic about all this is the fact the game is presented so impeccably. Character art is gorgeous, animation is slick, the environments are limited but nicely detailed, and the bosses are true sights to behold.

Unfortunately, even if you can look past the braindead gameplay and enjoy the pretty visuals, the game is over way, way too quickly. There’s just six bosses (the initial five + a final boss). All that’s left after that is to try and score those good end-level ratings, but since the game is fairly generous with the high ratings, that’s not an onerous task. There’s no alternate characters, there’s no plot to enjoy, and there’s no real variety in the bosses tactics.

As someone who loves the Dynasty Warriors franchise, and appreciates Monster Hunter for everything is stands for, his attempted meld of the game styles fails badly. There’s nothing overly broken in the game aside from the camera, but it manages to be monotonous despite lasting a handful of hours. A true feat, though not one developers should be striving for.