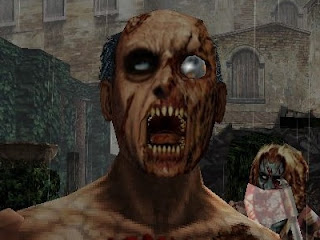 House of the Dead 3 has quite a history. First released to the Arcades back in 2002 by Sega, the game was well received amongst the gaming community and found its way onto many home consoles. Fast forward 10 years and the game has resurfaced once more, boasting all new PlayStation Move support following the success of prequel entry “House of the Dead: Overkill – Extended Cut” on the console and comes off as the definitive home edition of the game.

Set in the year 2019, society has largely collapsed in the wake of the zombie outbreak. You play as Lisa Rogan, daughter of ex-AMS agent Thomas Rogan (protagonist from first game) and his former partner G as they explore a Research facility believed to be linked with the world collapse, after Thomas Rogan and a group of commandos go missing there. Alongside this, the game also goes out of the way to explore the original motives behind series villain Dr Curien, and his role in the creation of the undead.

You have several different modes of gameplay, with Survival mode acting as the main adventure as well as a Time Attack mode. The gameplay is typical of many arcade shooters. Armed with a shotgun, your aim is to explore the research facility and find Thomas Rogan, taking out the Undead hordes as you go through each level with an additional boss at the end of them. 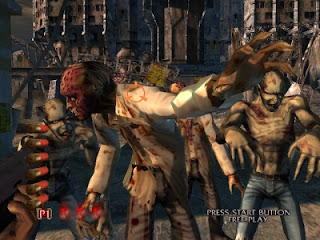 You can go through this play this either solo or co-operatively, with the 2nd player being able to drop out or join you at any stage of the game, so long as you have remaining credits. Like most Light Gun titles, it won’t take you long to beat the game but what is on offer here is quite an enjoyable shooter and one that possesses a good amount of replay value through offering you the choice of alternative paths throughout the game, four alternate endings and online leaderboards for high score fans. However, you’ll still end up experiencing most of what the main game has to offer within half an hour sadly.

Once you’ve successfully completed a level, you will then be given letter rank to grade your performance, S being the highest and E being the lowest. S rank gives the player two bonus lives, while A only gives one and once you reach the end of the game, you’ll be given an overall rank. The rank you receive affects the ending you’ll get at the end of the game, which helps add to the replay factor of the game rather well. You’ll also unlock a behind the scenes interview as well upon beating the game for the first time, although it’s nothing particularly special. 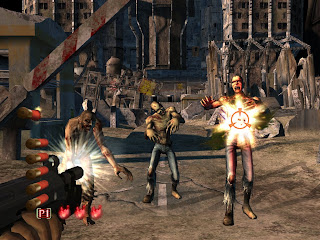 You can play the game using one of two methods, either through the PlayStation Move or the DualShock 3 controller, although the Move option is undoubtedly superior here as the game was always meant to be played through a motion controller and Sega delivers fairly well here on the Move. You’re also given several other options to toggle with the game’s settings, such as difficulty levels, number of lives you have, number of credits and more.

Then we have Time Attack mode. You start with simply 30 seconds on the clock with which to beat the entire game. You earn extra time though depending on how good your shots are against the undead and 2 seconds for every hit against a boss, alongside other things like successful rescue events. However, if you are hit by a normal enemy, you lose 7 seconds from the clock & 15 seconds when a boss hits you. The mode is a bit gimmicky but it helps keep the game from feeling more repetitive

In the graphics department, Sega have done little to update the game for its PS3 port and unsurprisingly for a 10 year old arcade shooter, its age shows quite noticeably. Enemy designs are still great and the framerate here is much smoother than on the other home editions, so it’s not all bad news. The soundtrack has not come through particularly well though. While it suits the game’s atmosphere just fine, some sound effects are missing from the arcade version and the cringe-worthy lines spouted by the characters in the cut-scenes are just irritating.

Make no mistake, this is the best version of the game out there on Home consoles. While it certainly shows its age 10 years on, the campaign mode still as fun as it ever was but for those who already own another edition, there’s no real reason why you should buy the PSN version as well. And with House of the Dead 4 on its way to the console in the spring, it may be a better idea to save your pennies for that instead.