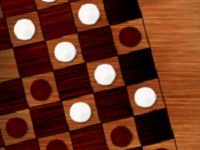 Sometimes known as Draughts, Checkers has been a popular board game around the world for generations. Often referred to as “The Poor Man’s Chess” due to its simplicity, the game has quite a following so it’s no surprise to see that Tesko Gaming have decided to bring this title to the App Store. While it struggles to make itself a highlight amongst the large crowd of similar Checkers titles, it’s certainly one of the more polished attempts.

You have two modes on offer here, although they’re both pretty similar. First of which is a quick mode, which allows you to simply jump into the action against the computer with all the settings already in place, while choosing the new game option allows you to toggle things such as difficulty level and who makes the first move, as well as whether you wish to play against the computer or another human player, with online multiplayer promised to be included through a future update 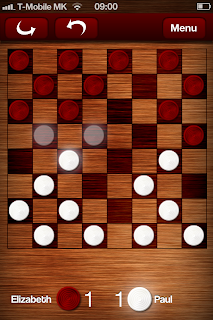 The gameplay of checkers is simple. Based on an 8×8 board, each player has their own set of 12 pieces at each end, placed on opposing coloured tiles on the board and your aim is simply to be the last man standing by taking out all of your opponent’s pieces. You move around your pieces by sliding them diagonally from one space to the next, provided the next space is not already occupied by another piece.

Pieces come in two classes, the normal variety which can only move forward or “Kings” which can move in any direction; these are obtained when you reach the other side of the board. In order to take out your opponents piece, you need to jump over them diagonally if the space behind is empty or they’re not on the edge of the board and you can do this for multiple pieces in one turn. Upon being jumped, the piece is then removed from the board and can no longer be used.

It’s a mandatory move whenever the chance arises, even if it then puts you at a disadvantage, which proves to be slightly frustrating at times. You can also undo and redo moves, which does prove to be quite useful whenever you make an accidental move but by allowing you this feature, the game then becomes all too easy to win. Although this version is Checker is very much a no-thrills affair, it recreates the game quite well and proves to be fun to play on the go, particularly in the company of friends. 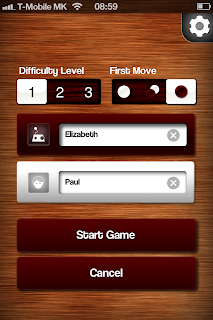 Graphically, the game features a wooden board style of design which wouldn’t look to out of place on a physical set. It’s also exactly the same graphical design as in their Reversi game, from menu layouts to the wooden design. Like their other title as well, the game also features no soundtrack at all, only presenting us with the odd sound effects.

Overall, Tesko Gaming have presented us with another fine board game adaptation to the iOS. While it’s certainly a no-thrills affair and like it’s sister game, will find it difficult to make itself known amongst the other iOS Checkers titles, it’s a well-crafted experience and is worth a try for any fans of the board game.