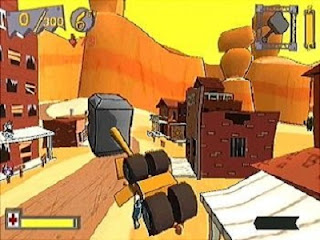 As a Nintendo gamer, I missed the era of the PS2, with my party kart racing experience coming from the likes of Mario Kart and Diddy Kong Racing. Cel Damage: Overdrive attempts to take the battle mode aspect, made famous in Super Mario Kart, and create a full game experience from it.

What I gathered from the opening cutscene is that there are various racers who are starring in a cartoon which is centered around a demolition derby. The story isn’t that great, and you won’t be finding any character development as the game entirely lacks any form of single-player. There is a battle mode, where up to four players can battle in out in three different matches, with there being six players in total during games. Being a game focused heavily on multiplayer, I was shocked to see any lack of a tutorial on how to play the game. You are simply thrown into the action, having to fumble around with the controller to get your head around the mechanics of the game.

The way that the karts control is horrible. It’s all very sloppy, with every kart sliding around as if it were on ice. When you’re selecting your character, there isn’t any information in-game to their individual stats. Through playing the ones currently unlocked, I found that some were heavy, whilst others were light. It would be nice however to see clearly how heavy a kart was, and how poor (or poorer) its handling was. 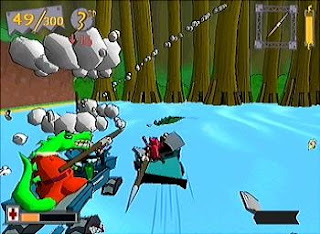 What baffled me most about the karts, was their amazing ability to defy gravity. On many occasions, I found myself driving towards an obstacle (which may or may not have been intentional), yet instead of hitting it and stopping, I would simply drive up the side of it. With the terrible handling that is present in the game, you will find yourself getting stuck in a large variety of places.

Adding onto the ability to easily get stuck, the courses (twelve battle arenas in all) are poorly designed. It almost seems as if they tried to cram everything into the setting they desired. It all just ends up feeling really cluttered, and given the difficulties that arise in the kart control and the horrid physics, it feels like playing Diddy Kong Racing’s battle mode drunk whilst sober. I found it hard to find enjoyment in most of these courses.

There are three different modes throughout the game, all which take place on the same maps. The first is Smash Attack, which is your basic balloon battle mode. Various items are placed around the courses and you have you attain a set number of ‘hits’ on your other enemies to win. The next game, Flag Rally, see’s your capturing flags which move around on the map. Finally, there is Gate Relay, which is for those who want to race around the maps. 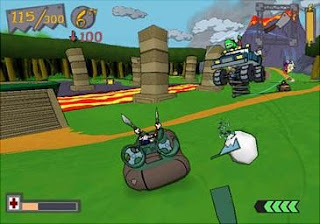 Gate Relay was by far the worst of the modes. The courses are completely unaltered and all that has been added to make it a race mode are gates for you to drive through. There are no boundaries and you are free to drive where ever. Until I had played Cel Damage, I had never seen an AI drive the completely wrong way. Not only do they drive backwards, and collide with you, but they also are relentless in attacking you from the front. A good hit in any of the game modes can send you flying across the map, and on more than one occasion I had no control over where I was headed. The AI isn’t that bad but it’s too easy on normal, and becomes unforgiving on hard.

Flag Rally is by far the best mode of the three. There are three to four flags at one time and a heavy hit from an opponent will see you lose one of your flags. If you manage to bring more than one flag to the goal then you will attain a bonus, giving this mode the largest amount of strategy. You are able to increase the number of hits/flags/laps in the respective modes, but the games do drag on for a while. 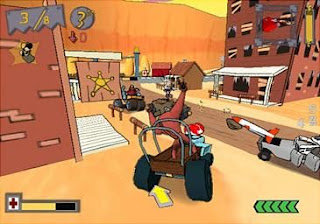 One positive is the visuals. The cel-shaded graphics work well given the context of the game setting. Although a little rough (probably the fact that this game was released in 2002 and I’m playing it on a HD television) the graphics are nice, and the characters, even at a distance are identifiable. The sound is far less memorable however, and I doubt in a party of four many would stop the trash talk to listen to the music.

The game is not very lengthy, and unless you’re at a terrible party with no means on enjoyment, you probably won’t play this for long until to reverse back to another party racing game. Cel Damage tries to isolate a small aspect of what is fun about the kart-racing genre, but it’s thin in substance and it doesn’t produce the best experience. If you can handle the difficulty of the kart controls you may find some fun here, but it’s just lacking content and fun.