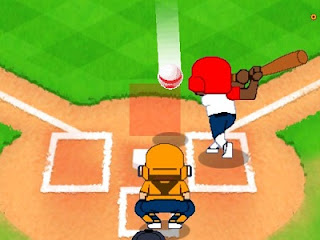 Following on from my previous review, Big Cup Cricket, is the other Square Enix foray into sports games for Android, Big Hit Baseball.

This game differs very little to Big Cup Cricket. The game mechanics are identical as are your roles as batter, pitcher and fielder. Where it differs slightly is the attention to detail. As a baseball game you would expect that a Japanese company would spend more time developing this than a cricket game due to the popularity that the game holds in Japan.

This attention to detail means that it becomes a much less frustrating venture as both pitcher and batter. As the pitcher I think the mechanics are much more user friendly since you aren’t running in to pitch you are static on the pitchers mound meaning you don’t have to time your delivery like you do in cricket. While in cricket this would be annoying because if you didn’t swipe at exactly the right time the bowler would just run through the crease and it would be a ‘no ball’ resulting in giving away one run (a penalty, for our non-cricket playing friends). 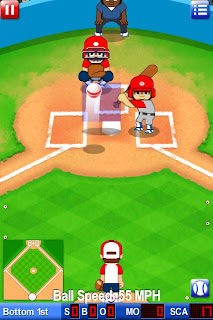 As a batter the responsiveness of the swipe system seems to be much more refined in this take on baseball. This I find to be very strange since as a batter in both sports the game works exactly the same. The swipe, depending on the direction, length and speed will go where you want it however in cricket if you swung too early the game wouldn’t respond. In baseball an early swing gives you a badly timed shot. This was my biggest frustration with cricket since you could be bowled easily simply because your batter didn’t respond.

Fielding is equally disappointing in both games – it’s automated by the AI – and as I stated in the other review it might have been better served by allowing you to set the field yourself. The other advantage to this would be that if catching was automated you could have a more clear distinction between the bad teams and the good teams with an increased or decreased catching ability.

If you didn’t like the cartoony graphics and ridiculous dives that made up the aesthetics of Square Enix’s take on cricket then you won’t like it here either. However if cricket isn’t your game or if you really liked the cricket game and want to try this too then go for it. I personally enjoyed this more.