Bryce Boltzman never dies, and neither does this game.
I really have to hand it to Konami. Even though recently released action title NeverDead hasn’t really been treated all that well by reviewers, they’re continuing right along and supporting it with DLC packs.
The first one, aptly titled ‘extension pack volume 1’ is available right now on the PSN and Xbox Live. I can’t seem to locate the link for the title on Playstation Network, but it’s going for 320mspts on Live- that’s a pretty high price tag for a game that didn’t exactly impress too many. 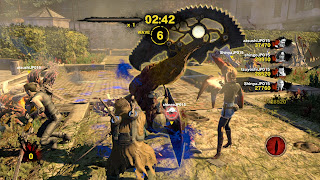 That’s numero uno- the second pack will be out on the 28th (Not the last day of the month this year! Leap year FTW!) and brings a decent amount of content with it too.

Honestly, you do get a pretty good amount of stuff, it’s just that that high price tag is more than a little put-offish. I can’t imagine all that many players are going to bite on it. And it’s really a shame, because Konami obviously believed in the game (they pre-made a pair of expansions after all) and the concept is kinda fun.

Wheels of Destruction unleashes the Scout