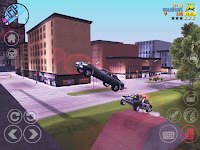 Rockstar Games made a few announcements today about Grand Theft Auto IV on PSN and the iOS titles bearing the name. If you don’t have the latter already, now’s the time to buy.

First, a little bit about GTAIV. The game just hit the PSN (did you think it was out already or is that just me?) and is being offered up in two flavors:

Available now in the US, GTA IV is priced on the PSN for $19.99, and GTA IV: The Complete Edition (which includes the full game as well as “The Lost and Damned” and “The Ballad of Gay Tony” DLC episodes) is available for $29.99 on PSN. PlayStation Plus users can also purchase the Complete Edition for $23.99 (20% off) until Tuesday, February 21.

Moving over to the ever-popular iOS devices, Grand Theft is going on sale- and it’s a good one. GTAIII Anniversary is getting a whopping 80% sliced off it’s ticketed price and has been cut down to a paltry .99 USD.

And if you think that’s something, Chinatown Wars has been discounted 90% as it tumbles down to .99 (USD… but you didn’t think I was gonna switch it up on you did you?) as well.

This sale is only running through Monday (the 20th), so grab them now before you forget or something. That’s usually what happens to me. In fact, lemme give you the links right to them. No excuses!