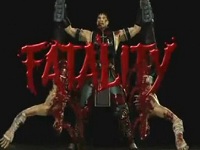 It looks like Australia is finally going to grow up and join the rest of the world, with the Australian Government introducing a bill to parliament to introduce a R18+ age category for video games.

Previously the maximum age rating for a video game was MA15+, meaning that any game that would be granted the R18+ rating (which does exist in films) would simply be banned instead. There’s been some high profile cases of that in action in recent months: both Syndicate and the recent Mortal Kombat games are currently banned from sale in Australia.

“The R 18+ category will inform consumers, parents and retailers about which games are not suitable for minors to play, and will prevent minors from purchasing unsuitable material,” Clare said.

Good to see some progress finally being made here. I’m sick of importing the cool kid’s games.

Review: Who Wants To Be A Millionaire? Special Editions + DLC (Xbox 360)