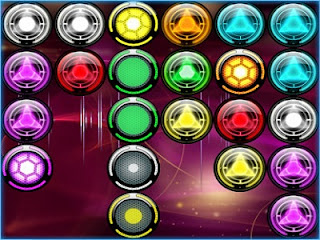 When I sit down to play a rhythm game I only really want a few things. Gameplay that is simple yet at the same time fun to keep me playing for hours on end and a tune that annoyingly stays in my head, with me humming along gleefully. Sadly, you’ll find none of those in zPulse.

The concept is simple; tap pieces every few seconds to clear them whilst listening to music. Think Drop7 meets Tap Tap Revenge. The gameplay field is filled with seven different pieces, all which have their own colours and independent timing cycles. The pieces grow until they are full with a simple tap clearing it from the field. If you are unable to tap the piece in time, it will either reset its cycle or become locked. What does ‘locked’ mean? After an undisclosed number of failed cycles, the piece will be locked and unable to be cleared. 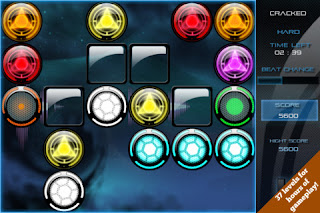 What troubles me most, is that for all seven pieces, you’re provided with no knowledge on the speed of the pieces and their cycles, nor do you know how many cycles before the piece locks. You are unable to randomly tap the screen, as every tap that isn’t on a piece at the right time counts as a miss. When you get a miss, another piece is added onto the screen. With no knowledge of the cycles, you’ll find yourself failing the levels pretty quickly.

It wouldn’t be such of an issue if the songs were shorter. Most of the easy levels are over four minutes long. The label ‘easy’ doesn’t fit the difficulty level that well either, as I found myself failing at that level repeatedly. Worse news for a music game, the music seems to be long Garageband loops, that aren’t catchy in the slightest.

Each song is divided up into a series of phases known as ‘beat phases’. At the commencement of each phase, the gravity of the field changes, flipping all the pieces. If you’re right handed you might want to play this game flat on a table, because otherwise your hand will block the indicator of when the next phase is coming. 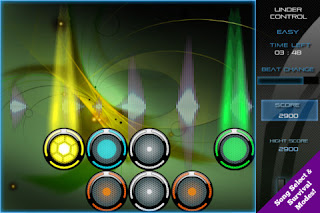 As soon as the ‘beat phase’ clocks over, the all the cycles of the active pieces are reset. It seems weird for this to happen if this was meant to be a rhythm game. The cycles also speed up, but it makes no difference as you are unaware as to the original speed/cycle length of the original piece.

The game offers thirty-seven different tracks, with the completion of a level required to unlock the next one. Honestly though, I cannot see myself playing through all of these songs. The game isn’t interesting and is more annoying than anything else. If there was an easy way of introducing all the elements, rather than pushing you into the deep end of the swimming pool, it might be bearable. But it doesn’t and unless you wish to play the same five minute level over and over and over again, look somewhere else for a rhythm game.