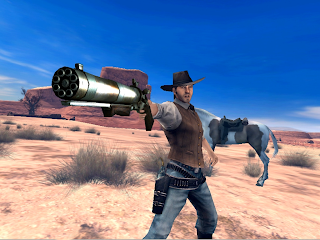 Gameloft has, with Six Guns, descended into a level of game development depravity so low there should be a circle of hell reserved just for it. The game is so cynical that it’s genuinely insulting to anyone who downloads it.

Nominally it’s a free game to download and play, but it works much like Facebook games like FarmVille in practice. Completing objectives earns experience points, earning levels allows you to buy better gear. But the good gear is expensive and takes a lot of time to grind towards, so the incentive is that you hand over real money to “earn” these goodies, shortcut style.

If it stayed at that, then Six Guns would be merely derivative of the highly successful marketing formula that Zynga has turned into a billion-dollar company with. That’s not the offensive thing. No, what’s offensive is that Gameloft has managed to rip off not one, but two games with Six Guns. The other game is Rockstar’s rather brilliant Red Dead Redemption.

See, aside from the status bar up the top that is a direct copy of Zynga’s Facebook games, Six Guns looks like Red Dead for iPad. There’s an open world with missions placed around the place, and it takes a while to wander from one end to the other. The western setting is, naturally, an appealing one, promising players that they’ll soon be exploring run-down fortresses, ghost towns and miles of desert. There’s even a trusty horse to call on to travel around even faster. 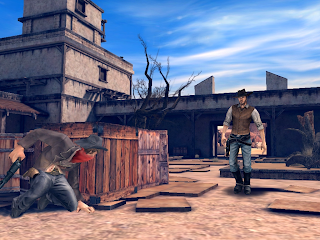 The problem is that not a single bit of the game is pulled off in a manner that is anything but embarrassing compared to Red Dead. The “open world” is utterly empty aside from those missions. The rare moment where an event happens such as a snake attack do little to break up what is a very boring environment. Such a plastic environment is not fun to explore. The bad news for Gameloft is that a boring game to explore is a game that doesn’t give players much incentive to pull out the real pocketbook.

The presentation is equally bad. There’s no story worth mentioning, the environments look as plastic as they are empty, and the sound is merely functional. Gameloft usually manages to get its games looking technically proficient, even if they’re derivative. The poor technically proficiency of this game just demonstrates how cycnical the developers were about it.

And the game fails to play well, to boot. Aiming on the iPad’s touch screen is shocking – worse than almost any other game I’ve come across. Movement lacks frames and riding a horse is an experience in itself; even when you manage to control it, the horse will jump over objects it shouldn’t, and get stuck in all kinds of strange places.

Don’t give Gameloft the satisfaction of this download. There was no attempt, whatsoever, to develop this game with any creativity, or the intention to entertain the players. This was developed for the sole purpose of earning Gameloft some cash, and it really doesn’t deserve it.

Did Santa bring the first PSN update of 2012?