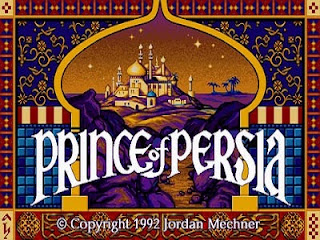 Prince of Persia is a name by now everyone knows. From dynamic action games in the past few console generations, to a feature film that was fun but made little narrative sense, the game’s name is one that has endured the test of time.

Going back to the classic game, recreated on the Game Boy Color and available on the eShop Virtual Console as the third Game Boy Color download, might make you wonder what the fuss was all about. The game has the illusion of being a platformer, but in practice it’s a simplistic puzzle game with a nasty time limit and some very, very clunky controls.

Players take control of the prince on a quest to save the damsel. The trouble is, he only has 60 minutes to achieve this. That 60 minutes is an actual, real-life time limit, and the screen has an ugly countdown ticking away at the bottom of the screen. With 12 levels, you’ll only have five minutes to complete each. This would be fine – levels are reasonably short, except that each death sends you back to the start of a level, and the time wasted in a death is not reset. 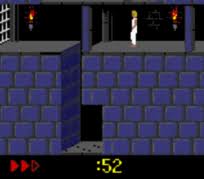 Given that the prince is a fragile glass cannon, death is far too easy. Falling too far kills him. Guards can easily kill him. A mistimed jump to land on some spikes kills him. Nothing in Prince of Persia is so difficult that you can’t see it coming or avoid it with ease… or you would were the controls tight. Unfortunately, they’re the exact opposite. Tapping the D-pad in the direction you want just the once will leap the prince a sizable distance across the floor. Try and turn around and it’s far too easy for the game to recognise your turn as a “turn plus movement,” which will usually sent the prince plummeting into the abyss. The combat is anything but dynamic, and in general the game feels like it has no interest in doing what you’re trying to input through the buttons.

There’s the ability to use the B button to make relatively small movements, but it raises a question I’ve been asking since this game was originally released: Why not just make the prince responsive in the first place? The difficulty in controlling the hero gives the game some challenge, yes, and the easy deaths give the time limit a relevance, but why not make the game challenging in more interesting ways than a frustrating difficulty. Of all classic games, Prince of Persia has aged worse than almost any of them, thanks to these controls.

The presentation helps things somewhat. Simplistic as it is, the rare note of music (the in-game action doesn’t have a soundtrack) and the basic visuals do convey a nice sense of fantastic Persian dungeon crawling and heroism.

And that is why the game is still recognised as a classic. Like a good book or fairy tale it conjures a sense of wonder and magic.

It’s just a pity that it isn’t a whole lot of fun to play now.

Starhawk cruises through this PSN update