Klonoa isn’t synonymous with the platforming genre like a certain moustachioed plumber is, but he deserves to be. Namco’s little guy is behind some of the most unique outings you’ll find, despite being in the same store that houses countless other classics and new games alike. If you’re not repulsed by the cuddliness and enjoy the occasional hop fest, head to PSN right now.
The basic premise is that Klonoa and his friend Huepow are off on a quest to save a diva from generic villain #06713 the evil Ghadius and his right-hand lackey. The heroic duo will journey through various kingdoms and villages, stopping to battle vicious monsters and corrupted allies along the way. With such cutesy visuals, music, and dialog you would think of it as a typical storyline, but there are actually some interesting twists. Admittedly a lot of it is disposable, but it serves is purpose just fine.
As said earlier, Door to Phantomile truly does inject new life into the platforming genre. Rather than squashing your foes, shooting them up, or throwing punches, Klonoa uses his magical ring to pick them up and carry them. They can then be used to pelt other enemies, give you an extra jump boost, or thrown away. Foes too big to carry can be stunned by the ring, transforming them into platforms. Klonoa also comes equipped with a fluttery jump ala Yoshi’s Island, so precision is never an issue when hopping from platform to platform (unless you’re downright sloppy). The two abilities combined enabled the developers to come up with creative puzzles that require you to make use of every trick in your arsenal. 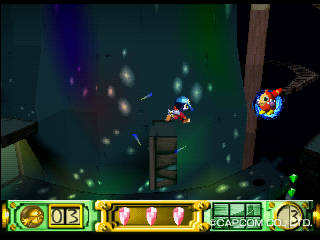 With only 14 main levels, the game is undeniably short, but there’s still enough to do after completion of the story to justify the price. Most of that extra value comes from replaying the old stages, for hidden throughout them are various denizens of the world trapped in bubbles. You’ll need to rescue them if you seek to unlock the final level.
It’s worth saying that unlike the Wii remake, this version only has three hearts (representations of stamina) instead of five. That means the game actually has some semblance of challenge on rare occasions, since you can’t be completely reckless. You’re given a generous amount of lives to survive the reasonably lengthy levels, but some of the last few may test your mettle.
The visuals, though still somewhat aesthetically presentable, are beginning to show their age. While the worlds inhabited by the creatures and tribes of the world are colourful and inspired, the PlayStation’s polygonal appearance and blurriness have been less kind. Namco also tried to utilize some 3D effects during more gimmicky sequences, leading to a handful of bizarre moments where you question how you were even hit.
With that said, most of the other 3D portions are used effectively for solving puzzles and navigating the levels themselves. You can face the background to grab enemies, activate switches, or access cleverly hidden shortcuts and secrets. Door to Phantomile is arguably one of the most dynamic “2.5D” platformers to date in that the extra half dimension actually comes into play for something other than fanciness. 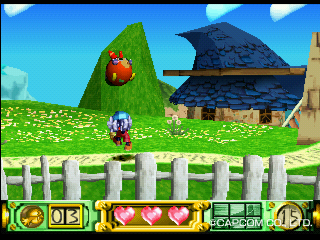 Like the visuals, the soundtrack is consistent with the happy theme. It oozes charm, albeit a kind that may be off-putting for some mature players. That annoyance may be compounded by the characters that spout gibberish dialog while the on-screen text is visible. There’s unfortunately no option to turn off the incessant babble, so it may be advisable to keep the sound off if all the joyousness frustrates you (though you will miss out).
Namco truly outdid itself – nearly 15 years after its release, Door to Phantomile is still one of the freshest platformers available. If you can get past the cuteness, the core gameplay makes every niggle irrelevant. It can’t outdo the PlayStation 2 sequel, but that says a lot when its main competitor is digitally unreleased .
-Clark A

It’s time to drop the RPG from JRPG