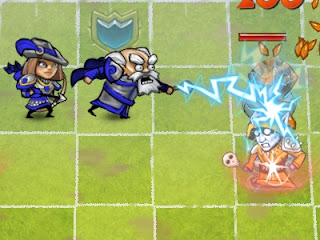 Now, the app store has a terrible predicament. Let’s ignore the obvious problems like the fact that it’s a walled garden, that it’s so heavily censored, or even that the comments are only just above the IQ level of people who leave their thoughts on Youtube – it has a bigger problem than all this. The issue Apple is facing is that 90 per cent of all apps within the store are flaming bags of dog crap that are left burning on your porch until you stomp them out. But by then your shoe smells awful and you’ve lost your 99 cents to it. Hero Academy is not a flaming bag of dog crap, but it is wholly unremarkable.

The game is a free offering and it is based around multiplayer swords and sorcery turn-based tile combat. The winner is the one who manages to destroy the opponents pair of crystals first. Various random powerups and units are deployed on the battlefield and you poke them around on your Apple device to do this and that. Think Advance Wars, but with a much smaller battlefield.

The first thing that struck me about Hero Academy is the amount of ads crammed into it. Every single page you are on has an ad. Including a full page one after you end your turn. Bar the game screen, an ad pops up for either a tacky dating site – or free iPhone-you-are-today’s-winner-click-here-before-time-runs-out. Die. 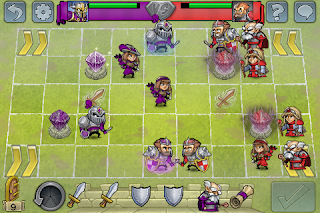 I spoke with the community (at least the part I played against) and asked their opinions. The first thing everyone had said was that the ads were annoying. The first I spoke to (Orangelight) said “The ads are stupid. They should have just made it 99 cents.” And if you’re reading this, hi!

I too shared this sentiment. I have incredibly stubby fingers and I kept misclicking (can you misclick on a touchscreen…?) and it kicked me out of the game and booted me to a new Safari tab. I never knew that my intense hatred of advertising could rise any higher.

The second was the sheer amount of DLC there is. DLC that in some parts should have been essential – like the second faction you can play. The free version only comes with one faction, and I found the paid for team in battle to be a little overpowered. Now come on developers, if you’re going to give us a game like this do it right. When I played Tiberium Wars I didn’t expect to pay an extra couple of bucks to fight for Kane. When there are only two factions, you give us them both dammit! Especially if the damn Dark Elves are overpowered.

Other DLC complaints include the fact that to buy everything it would cost you just under a tidy 20$. Even some of them are utterly pointless like avatars and taunts. The only game I know where avatars are important is Starcraft; because if you see that Protoss player with a portrait denoting 500 wins as that race, you’re quivering in your boots before the game has loaded. However all it is here is simply “Wow. You shelled out three bucks to be better than me. Would you like me to stroke your ego or do you want to do it yourself?”

I’m halfway into this review and I haven’t said a word about the game itself, and I think this is pretty indicative. 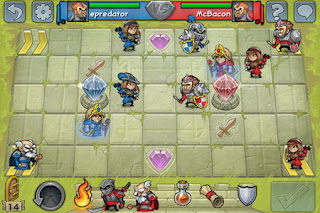 Gameplay is underwhelming. It held my attention for the 14 seconds when I was making my turn, but for the 30 seconds to two days in which you’re waiting for the other guy – the game took the opportunity to bombard me further with more ads and would not give me any notifications as to my new turn while I was busy killing time on Facebook or what have you.

You have to manually refresh it to see if you have a turn, and every time I did a part of me died a little. The best part about turn based combat is the anticipation. It’s like leaving the ice cream out for while to let it melt just that little bit. The wait makes it so much better. In Hero Academy, there’s no anticipation. Nothing. In games where they do it right, Frozen Synapse being the best one, the suspense is terrible. Edge of your seat type stuff. Here I’m distracted by my cat staring into a wall, wondering what the hell he’s looking at.

Oh, and by the way. For those of you playing on the train with no WIFI, I’ve got bad news. There is no singleplayer. As a dedicated singleplayer gamer, this was unacceptable. So much so I went off and built a Minecraft house nobody will ever live in to mull my disappointment.

This game is just so mediocre. So bland. It’s like surfing Tower Defense Flash games – everything is the same. No spice, no flair, just a series of sub-par programs with no originality. If it weren’t for the ads pissing me off I really wouldn’t care about it one bit.

For a meh time, download Hero Academy. For a good time, turn off your iPad and read a book.
If you read books on your iPad, stop being a hipster and buy a real book (interesting tactic there, insulting the editor 😛 – ed).