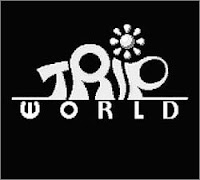 Trip World reminds me a great deal of Kirby games. It’s an obscenely cheerful platformer that stars a blob-like critter who can take on a variety of forms.

It’s also obscenely short, just like Kirby games. To get the big reason why you might not want to invest $Aus5 on this game; it’s over in around half an hour. With just the five worlds, each over in just a few minutes, Trip World might even be thinner on content than Kirby’s Dream Land. So you’ve been warned.

That said, this is half an hour of real fun. Yakopoo, the little bunny-crossed-with-Kirby critter bounds around the five levels with real spirit. He’s capable of turning into two extra forms – a helicopter (allows him to fly for brief periods, though he can no longer walk), and a fish (allows him to swim). Thanks to the brevity of the game, these extra forms are not used to their maximum potential, but they help spice up a level design that is quite simple. 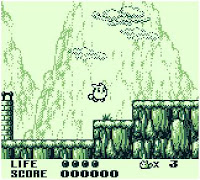 Yakopoo has a cute little kick as his main attack, which is very limited in range and that limitation gives Trip World a reasonable challenge, especially in the boss battles. It’s easy enough to run though the levels by avoiding the regular enemies, but the boss battles are mandatory. Those bosses have a limited range of moves and attacks, but they are fast, and Yakopoo is quite weak.

Then there’s the powerups, which are unnecessary but fun. Each of these turn Yakopoo, Kirby-style, into a different form, and give him a new ability. The ball is invulnerable and can jump really high. The flower allows Yakopoo to spit seeds at the enemy. If they hit, the enemy grows a flower on his head and is pacified for a while. Levels can be completed without these powerups, but they’re fun to play with. 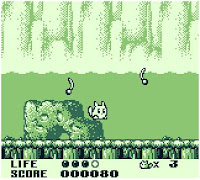 What really helps elevate Trip World is the presentation. The music is utterly charming and really pushes out your expectations of what the Game Boy was capable of. The visual presentation is also superb. Yakopoo has a lot of personality as he bounces around. The animation is fluid, the enemies are adorable, and there are even backgrounds that are worth looking at. It’s not exactly common to single out the visual presentation of a Game Boy game as a selling point, but it really is with Trip World. This is by far the best looking Game Boy game on the Virtual Console.

That makes Trip World a curiosity, rather than an essential purchase. There’s already a lot of good platformers available for download through the eShop Virtual Console; from the classic Super Mario Land 1 & 2, to the hardcore Gargoyle’s Quest, the obscure Avenging Spirit and, of course, Metroid II. Trip World is the least essential of all of those as a game, but there is something – call it an X-factor – that makes it a really good second string title to have sitting on that SD card.