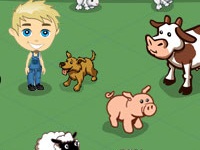 Social gaming specialist, Zynga, has priced its shares at $US10 a pop, following its formal IPO and stock market listing tomorrow.

It’s offering 100 million shares too, which will raise the company a massive $1 billion in cash.That’s a lot of virtual carrots.

It’s also the biggest tech company listing since Google’s $1.7 billion back in 2004.

It’s going to be really interesting to see what Zynga does with that capital, but the faith investors are putting in the company suggests its on the right path to a very profitable future.

So here’s a question for our readers: are any of you hooked on any of Zynga’s games? Or have you been in the past? I admit I spent far too much time in Cafe World a year or so ago, but eventually got bored of it. I didn’t pay for anything, but I do know people who have used real money before.

It seems collecting virtual stuff really does tap into our biological urges to horde stuff; even the stuff we can’t physically touch.

Get your GTA III on Android and iOS now! (+ trailer)