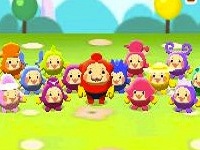 The eShop is well and truly away now. After the rather spectacular Zen Pinball and the quirky Freakyforms comes Pushmo, a charming little puzzler from Nintendo first party developer, Intelligent Systems.

While I’d rather Intelligent Systems focus on getting that next Fire Emblem game out, Pushmo is a fine little game in its own right. It’s a sedate puzzle/ platform mix, and a remarkably simple concept – there’s a little person stuck at the top of a tower (or some other vertical shape). Your goal is to get to the top of that tower by pushing or pulling parts of it forwards and backwards (into or away from the background of each stage).

See, the tower is broken up into a collection of blocks in various sizes and shapes. By pulling the blocks into different depths from one another, platforms are created that can be used to jump ever higher. The game alternates between carefully designed “standard” levels, and more frivolous levels that are coloured and designed to look like real-world shapes; everything from fruit to planets. 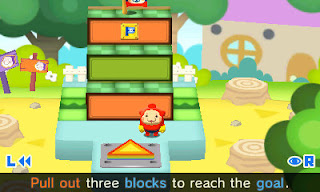 The 3D is used quite cleverly to give the platforming component of the game visual depth, making it much easier to gauge jumps than it might have otherwise been. There are no camera controls; the game is played entirely from a front-on perspective, and turning the 3D off does make the game less intuitive. Those with trouble seeing the 3D will miss out on a substantial part of the game’s unique quality.

The 3D also helps bring the obscenely charming characters to life, too. Everything is bright and colourful and bounces around merrily. The fact there is no time limit, the ability to skip levels that stump you, and no way to fail a level means this is a very laid back experience; designed to tickle the brain matter without becoming stressful. If you ever find yourself truly stuck, a quick trip to the level reset button allows you to start from scratch.

Levels can become very difficult, mind, and there are a lot of them within the initial download. This is easily the most content-heavy 3DS download to date, and with levels passing by quickly and the “just one more” impulse running strongly. This is one of those few times where the 3DS battery dropped so low to start flashing red without me even noticing, and even then it was hard to put the game down. 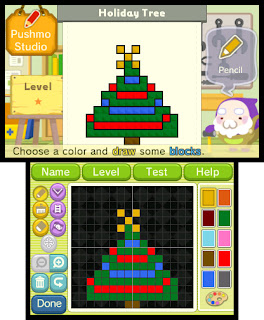 Only further extending its value is a very robust level creation mode, which amongst the legions of games with user generated content this sits up there with Little Big Planet. It’s possible to make some devilishly creative puzzles, and the requisite ability to share them is also present.

That said, I must say I’m disappointed that the only way to share levels is via QR Codes. Though that system does work, it also means you’re going to need to hunt out gaming sites and forums to track down other people’s levels. This stinks of laziness of Nintendo’s part – being unwilling to part with some server space to allow people to upload, share, and access a database of user generate levels would have been infinitely preferable to being forced to use QR codes, and Nintendo has done it the right way plenty of times in the past.

That that is my only real gripe with the game is a testament to Pushmo’s quality. This is a great, charming puzzler from a masterful developer, and coupled with the other handful of eShop 3D games released recently has gone a long way to restore my faith that Nintendo does care about downloads.