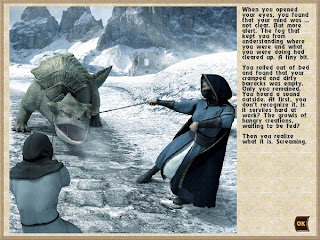 If I just quoted you, well, I have some explaining to do. If you’ve been following these series of reviews, you would know that I found one and two in the Geneforge saga to be utterly awful – so bad in fact that I nearly skipped the last three so I could spend my time writing other things. But the powers that be that run this site want some sort of closure to the saga, so I’m skipping the three and four, hoping that things got better, or at least changed – as I had complained about before.

And actually, I’m very lucky I did do Geneforge V.

Shocked? So am I. I had expected it to be the same tasteless slog through uninspired game design that one and two provided, not once letting up in the sea of grey blandness. But it seems those at Spiderweb listened very closely to my prayers (sent back in time to 2005 when it was originally released) and have actually made pretty much every one of my… suggestions a reality. You know what; I actually like it quite a bit. 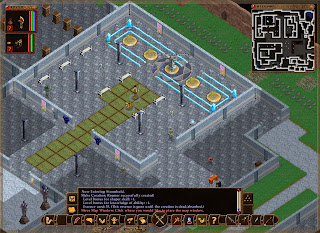 I was over the moon to find that they had filled out the lore of the world so much more – and, they went down the path that I suggested previously – the one about the creatures and the underclasses rising up to overthrow their tyrannical Shaper lords. The war has split the land of Terrestia in two, with the rebels evidently kicking some Shaper ass considering that their armies and lands are either in disarray and/ or on fire.

Despite their success, the rebels are fractioned off into a fair few splinters, some would simply see the current Shaper council overthrown and replaced with those more merciful to those without the powers of Shaping, and others desire to see the arts of Shaping lost and forgotten, so that the inhabitants of the land could enjoy a more even playing field in all aspects of life.

Your role in all this is very vague (as far as I got anyway.) You wake up in a Shaper stronghold far behind the front lines, with absolutely no clue of who you are and how you got here, once again proving that the old gaming plot formula of protagonist + amnesia = decent story actually works.
Despite the fact that you are not a Shaper, you seem to be able to do so regardless. Later on it is revealed that you are a Shaper, Shaped by the Shapers for the purposes of Shaping! DUN DUN DUN. Yes. It seems you are a Frankenstein creation of some sorts – and the question now is – are you willing to give the middle finger to your overlords and join the rebellion, or do you try to restore tyrannical peace to the land? Helping the Shapers in return for cash, titles and no doubt more cash. 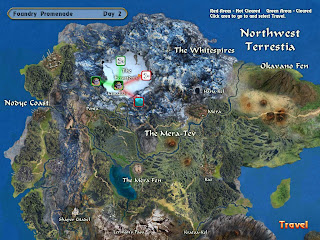 Here we have a divergent story line, with you picking a faction and running with it, or betraying it as you see fit. I relish the freedom given here. I chose to flip the bird at the Shapers (because over the last few games, the only words I could use to describe every Shaper character are ‘pretentious, self-important bleep’ and it’s a pattern that is continuing).

The game now offers almost a dozen classes, with the option to pick between the rebellion and the Shapers – all of them are pretty much the same, but the fact that they have a choice is wonderful, rather than being locked so rigidly into those basic three classes from one and two.

Character levelling has also been improved dramatically, with the point costs of improving attributes have been nerfed in some places, and I’m pretty sure the effects of them have been beefed up, or the monsters are weaker; because instead of getting steamrolled by everything, it’s a fair fight now and a fun fight at that.

Graphically, this game has undergone leaps and bounds. The animations are smoother, the spells are more varied and inventive, the monsters are rendered well, and to top it off the interface has been cut to almost nothing to allow you to actually see the game in full instead out of a tiny window on your screen! Speaking of the interface, words cannot express my delight at it being totally revamped, with easier hotkeys too! Everything I have suggested before is coming to life, and I’m loving it. Movement is now smooth, the jarring turn-based combat has been (somehow, I have no idea how) smoothed out, and the game will give you that heads up that I so desperately wanted. 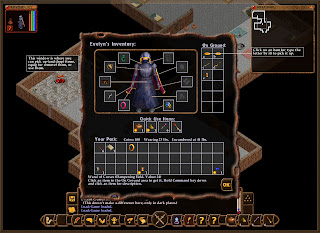 Let me be honest with you. I actually handed in this review late because I was too busy playing Geneforge V in the effort to screw over the Shapers as much as possible. Take it from me; I have never had this happen before. I enjoyed this so much I was awake until 4am playing until my tendons ached from clicking. I just wanted more more moar!

It’s very nice to see that Spiderweb pulled out those desperately needed stops and brought it up to its full potential in the last instalment. It astounds me that they were able to turn it around so well. There’s just so much more love and polish gone into every aspect of this game.

To sum up, Geneforge might be worth it just for the last one. I’m not sure about 3 and 4, but maybe I will have to find out.

The 24 Games of Christmas! Day #12: The Legend of Zelda: Ocarina of Time

Ranking the Elder Scrolls games; from Arena to Skyrim