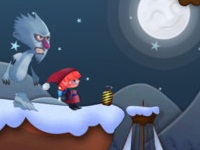 You may have noticed; Christmas is here. And with that comes an inevitable flood of games designed exclusively to cash in on the Christmas spirit.

This can be a good thing; Christmas is a wonderful time of year, which has still managed to retain some of its atmosphere and magic, despite the eroding forces of media and social cynicism.

The problem is that most of these Christmas games (especially those on iOS app stores) are cheaply designed and fail to capture much of the spirit of Christmas at all. Unfortunately, Elf Rescue is one of those.

It took me about a minute to forget I was playing a Christmas game. The goals of Elf Rescue are so generic that they can be found in a whole host of other, regular games; the little Elf man walks in a continuous, straight line. You have no direct control over him, but you can tell him to stop moving temporarily (so the spiders and other nasties travelling in preset paths don’t crash with him), and you can use his jetpack (assuming you have fuel) to fly around the level. 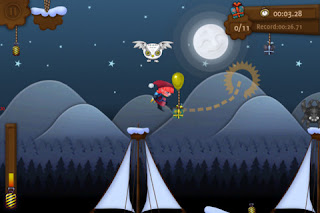 The goal is to collect presents that are scattered all over the level, then make your way to the “exit” (reindeer). None of the visual presentation has the bright, cheerful vibrancy of Christmas, though. It’s a surprisingly dull and muted experience, and the Elf looks like he was drawn in about a minute.

The sound presentation isn’t much better. It’s Christmas songs performed in a lalala fashion by someone who sounds like he was embarrassed to be in front of a microphone.

If it wasn’t enough that the presentation takes you right out of the Christmas spirit, the punishing difficulty certainly will. I prefer to think of Christmas as a social season, best shared with family and friends.

But by nature this game doesn’t want to be shared. There’s no multiplayer component, and the difficulty will put the young ones off. I understand that the difficulty is there in part because there’s relatively little content in the game, but this was meant to be a feel good game, not a throw-the-ipad-against-the-wall one.

It’s disappointing. By default I wanted to enjoy this game, as I want to enjoy each and every Christmas game, but Elf Rescue doesn’t want to be enjoyed. It wants to challenge, and it wants to focus on the challenge, rather than the Christmas presentation. In this way, the developers have got things very wrong: a good Christmas game should be casual.