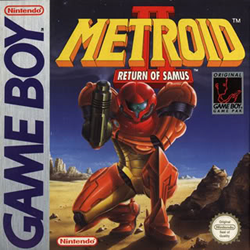 The original Metroid on the Nintendo Entertainment System was undeniably a classic. Many continue to play it to this day, even if it is somewhat dated, lacking a map and other basic features that we’ve come to expect from the genre. Unfortunately, its sequel does not receive the same recognition despite improving the formula. Why? Perhaps because it is akin to chasing morsels into an unexplored cave; exciting and rewarding, but ultimately too intimidating for most to attempt.

First impressions of the game might lead you to believe that it is in the same vein as Metroid on the NES, but Return of Samus is quite deceptive. Whereas the original was an open-ended 2D space adventure, this sequel is mostly linear – just as pleasant in its own right. Your objective is to exterminate every single one of the 39 titular monstrosities. To do this, you’ll need to expand your ensemble of gadgets weaponry as you explore the monotone corridors of a foreign planet. Once you’ve felled a certain quota of Metroids, new areas open up. You’re continuously obtaining new beams and devices that enable you to access hidden items and defeat enemies more easily. The different stages of Metroids constantly get tougher to deal with, so you’ll dread their arrival (in a good, challenging way, of course). 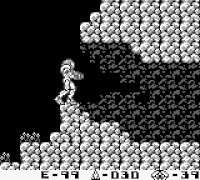 For the most part, Samus operates like a dream. The game’s jump physics allow you to manoeuvre the bounty hunter far better than before. Adding to this, Samus is capable of firing in multiple directions and can finally shoot downwards. You cannot fire diagonally, but you rarely need to. The one quibble with the controls occurs when you obtain the “Spider Ball” upgrade, which allows Samus to cling to ceilings and walls at will. It is easy to accidentally activate it while crouching to shoot at an enemy, but a pain to deactivate.
Welcome additions include the ability to save data and the ability to restock health and missiles at certain times. Grinding for energy was the low point of the original game, and Metroid II does well to abolish it entirely. Given that 3DS Virtual Console games already have a suspend feature on demand and save-points anywhere, you’ve got an arsenal of options to deal with.
Graphically, the sprites do an admirable job of making the game look like a sequel. Stout pee-shooting Samus has been swapped for a larger and more detailed depiction. Unfortunately, there are rarely any backgrounds beyond the simple black, so you’d best get used to seeing the same blocks and enemies over and over. It results in a feeling of disorientation and confusion. 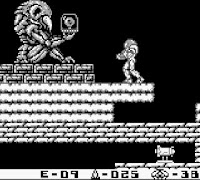 Compounding perceived repetition, Metroid showcases the shortcomings of the little handheld that could – namely greyscale visuals and four buttons. The former means it’s tough to tell exactly where you are at any given point in time, while the later means there aren’t enough buttons for an easily accessible map screen. As such, a map was omitted entirely (or it was due to time and memory constraints, but I’ve got a narrative here, so bear with me). Despite the game’s linearity you’ll still find yourself going backwards on occasion. We live in the modern day of the internet, so you can go download yourself a map if you’re lost, but it would have been nice of Nintendo to include a map in the digital instruction manual.
The music is varied, albeit not in the best possible sense of the word. Some areas have infectiously catchy tunes, but certain others only present you with generic bleeps in an effort to be atmospheric. These locales will dissuade you from keeping the sound on, but it would be a shame to miss out on some of the better melodies. That said, those looking for an eerie atmosphere may as well keep the sound off to heighten the sensation of trepidation whenever a Metroid pops up.
Metroid II is a remarkable improvement over the original in terms of mechanics, yet it is instead held back by the Game Boy’s hardware limitations. Some players will be enticed by its unique atmospheric approach, but I suspect others will simply find it somewhat outdated and cumbersome. If you can tolerate watching gameplay footage for any length of time, it may well be worth a purchase.
-Clark A.