Sydney-based indie developer, Nnooo, has been peddling its original Pop game across a range of platforms for a few years now. It was a solid launch title for the Nintendo WiiWare platform, and has made a largely successful move to the smaller Nintendo DS and iPhone screens.

Now it’s back in a format that is more natural – the bigger iPad screen. While the upgrade doesn’t add in too much, as more of the same it’s still quality, and coupled with the natural play style the large iPad screen allows, this is probably the definitive version of the game.

As with the previous Pop versions, the iPad game is exceedingly simple – pop coloured bubbles as they float across the stage. Popping bubbles of the same colour builds a score multiplier, and there’s a timer ticking down that falls faster when you miss bubbles entirely or accidentally tap a bubble that has a skull icon attached to it. 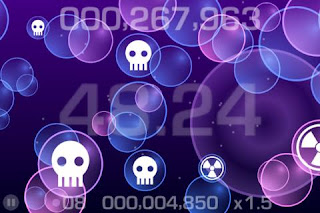 The game is broken up into a range of stages, and those stages differ in terms of the size, quantity and colours of the bubbles, as well as how fast they move. There’s a couple of powerups that produce a few beneficial effects, too, from removing the skull bubbles to slowing everything down, and creating small explosions that will pop every nearby bubble of the same colour to the one that exploded.

That’s about all there is to the game, and the goal is to get the highest scores possible. There’s a couple of different gameplay modes – from games with strict time limits to a “Zen” play mode which has no timer, but the core game remains the same each time.

It’s all presented nicely, with a chilled-back soundtrack and nice visual presentation, though a slight criticism remains that in a few cases, bubble colour is too similar and can mess up those high combo counts you’re meant to be building up. 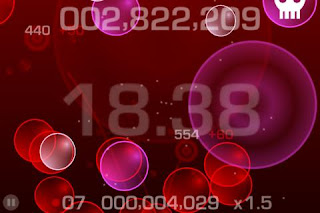 It’s also worth noting that right now there’s no Game Center high score tables, which is a problem for a game of this nature, though Nnooo does promise us the update will come shortly.

One final complaint might just be a result of my uncoordinatedness – sometimes I could swear I was tapping on a bubble, and it registered by the game as a “miss.” Despite those moments which may or may not be my bad, tapping a screen is a far more natural way to play Pop than, say, pointing a WiiMote.

While this is an older game now, and people who have experienced another version of Pop may find reinvestment difficult, it’s still an easy game to recommend to newcomers. It’s accessible, simple and stylish, and is a good, chilled-back way to unwind after a long day.