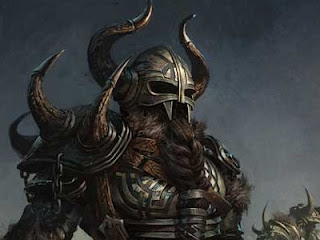 By now you will have read a few hundred Skyrim reviews, and in fact you’ve probably already bought the game and completed it yourself. You would know that many are claiming it to be “game of the year,” “the saviour of RPGs” and any number of other explosive exaggerations.

If you haven’t: it’s not any of those, though. It’s a very, very good game for sure, but Skyrim has flaws, and they are flaws that, were they in any other game, would border on unforgivable. It’s almost like the Elder Scrolls games have the Steve Jobs reality distortion field in effect: raw charisma is able to convince the masses to elevate the games above their reality.

But Skyrim is a very good game. There are people who will look down at the score on the bottom of this review and have that same reaction that Eurogamer and Destructoid illicited for their reviews of Uncharted and Batman, but the reality is it’s a great score for a great game. Skyrim’s artfulness lies in its ability to tell stories within stories.

Where Dragon Age: Origins forced people to wade through clunky menus to read the books and snippets of information that fleshed out that world, Skyrim is populated by books that, one and all, provide a real sense of living history and wonder in the world. Based loosely on old Norse history and mythology, exploring Skyrim itself is the fun of the game. Discovering new towns, dungeons and points of interest across a massive world, interacting with NPCs that, 50 hours in, are still capable of surprising you is a true testament to the care that Bethesda has put into the game. 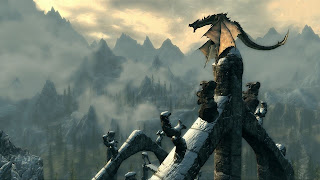 Indeed, where the vast majority of MMOs disappoint me because of the disruption between the fantasy world and idiot players trying to sell me “LOL!! 1K Flamin Swordz!111” Skyrim succeeds of immersing me within a fantasy universe with the same attention to detail as the best of Tolkien and other fantasy authors.

The same can be said about the visuals which, while somewhat plastic in sheen and lit in a slightly exaggerated manner carry an artistry and consistency about them that stays through the whole game; and music, which like Morrowind and Oblivion before it is simply the best game compositions you’ll come across. We already knew Bethesda would get those aesthetics right from the screenshots, trailers and past history of the series, so it’s a relief to see the end product doesn’t disappoint.

Then come the bugs. We all knew there would be bugs, and in fairness, they’re probably not as bad or numerous as a certain Fallout game, but they’re there, and they’re ugly. Just looking at the notes I took while playing the game, in the introductory sequence alone I got to experience a freeze that went so long I nearly reset my console before it jumped back into action, I experienced two cases of NPCs floating across rock solid ground, got stuck on the scenery once, and experienced a bout of slowdown. 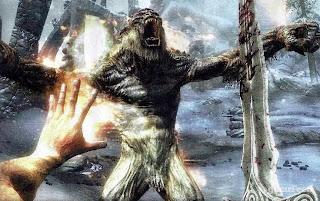 No doubt there will be many more patches to come, but we don’t forgive near-game breaking bugs in other games, and I’m not about to forgive it here. In fact, it’s worse in Skyrim – being absolutely enraptured in such a stunning world only to be dragged back into reality by a comic or nasty bug is incredibly disappointing.

I also take issue to the combat, which has never been a strength of the Elder Scrolls games, and though there has been some improvements here, they’re not nearly enough. The good is that the combat is now visceral – there’s real impact behind the weapons, and there’s a workable block-and-parry system in place. What really lets it down is the clunky way in which you change weapons. Going through your inventory (for both magic and weapons) you need to set a list of “favourites” which are brought up via a quick-menu at will. So, in some of the more complex fights, you’ll shoot your bow, then pause and switch to sword and shield once the enemy has closed to melee distance. You’ll take a hit or two and need to pause to bring up the menu for some healing options. Then it’s back to the combat. This pause-and-go structure is clunky and old school.

It’s just that there are better examples of combat wherever you look. Dark Souls has a more graceful and deadly combat system that keeps you on your toes. The venerable Dragon’s Age: Origins, a few years old now, has a better traditional, tactical feel to the combat. If we were assessing Skyrim purely on combat, than it remains behind the competition on most levels. 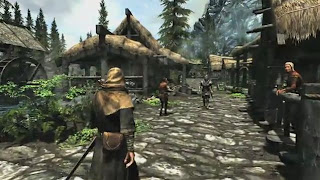 Thankfully combat isn’t so important to this game – it’s easy to go hours without actually drawing your weapon. Wandering around town, acquiring quests and talking to people is time-draining, and though this generally works well, there’s still a couple of moments where believability gets really stretched.

The biggest one is the fact that if you do something naughty, the entire town knows about it faster than a rumour or reputation could possibly spread. You could steal something, sprint to the other side of town, and the guard at the gates there will still arrest you. That’s some impressive psychic messaging system towns have adopted.

That said, it’s a very minor complaint. Bethesda have done a really good job giving each town its own unique atmosphere and environment, meaning that you’re always looking at something different, not just in terms of aesthetics, but also personality.

Of course, Skyrim is grander than the sum of its parts, and almost anyone would find themselves lost in this game for hours on end. But it’s not prefect, and the rough edges do begin to grate after a while.

Review: Back to the Future (PS3)