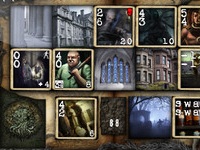 I hate it when marketers misposition a game to try and make it seem like it’s more than it is in effect. It happens a great deal with iOS games, and it’s happened here.

The Necronomicon Redux is marketed on the App store as a “RPG card game, based on the Lovecraft mythos.” What does that bring to mind? Call of Cthulhu, of course. But in action this game is nothing like Chaosism’s classic RPG, or indeed any of the other Lovecraftian games that have popped up from the likes of Fantasy Flight games over the years.

This one is about as complex as solitaire. The iPad is transformed into a board of two rows of squares. On one row go the monsters. On the other go the “heroes.” These characters are placed one at a time from a central deck of cards. The goal is to stop the monster row from filling up. If that happens, each additional monster drawn from the deck weakens the “seal” keeping the horrors from Lovecraft’s imagination invading the world. If that happens a couple of times, it’s game over. The player wins if he/ she successfully prevents that from happening; ie he/ she either wipes the board clean of monsters, or survives through to the deck running out. 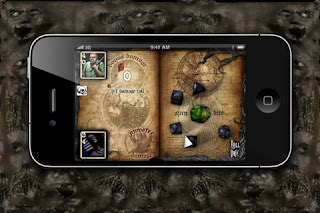 Combat between monsters and heroes happen when they’re placed opposite one another on the grid. It’s an exceedingly simple process – each fighter has two numbers on the top left hand corner of the card. If one fighter’s two statistics both outclass his/ her opponents, the win is automatic. If there is a tie, or one stat is stronger, the other is weaker, the game cuts away to a single dice roll to decide the victor.

It doesn’t help that the presentation is a poor grab at Lovecraft’s legacy. The art work on the cards is standard stuff and not a patch on the quality of the art work in the Call of Cthulhu card game. The music and sound effect are generic horror stuff and screams.

And then there’s a shop to buy more stuff. Why you’d want to, I have no idea. Ultimately this is a game of wasted material. Cthulhu and the Lovecraft mythos is a horror staple, and we’ve seen it put to great use in games in the past.

This just isn’t one of those. It’s a $0.99 game, and it plays like one. Be warned before you get pulled in by the promise of something more.