Greed Corp is one of the better digital board games available on the various download platforms out there. On the iPad, it’s not in the perfect format.

Part of the secret to this game’s resounding success is the gorgeous production values. Greed Corp oozes style, from the vibrant colours and distinctive landscape, to the subtle, but effective animations and, most of all, because of the stellar soundtrack of music pumped straight out of a gramophone. 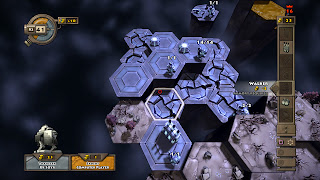 Of course, that style would be for naught if the core gameplay wasn’t sound, but Greed Corp gets that right too. The basic aim of the game is to be the last man standing. To do this, you’ve got three main tools at your disposal – harvesters for gathering resources, soldiers for grabbing land and attacking your opponents, and cannons for causing massive damage.

The catch, and the reason the game is so compelling despite being so limited in scope on the surface is in the scarcity of resources, and the damage that gathering resources does. The playing field is made up of hexagonal tiles, up to five units in height. Using a harvester to gather resources from a tile will collect you two units of resources on the tile the harvester is sitting on, as well as each adjacent tile, but at a cost – collecting resources shrinks the tile by one height unit. Once it gets to zero, the tile crumbles away and everything standing on top of it falls into the abyss.

So collecting resources destroys the land you’re trying to occupy, and finding a balance between resource gathering and trying to preserve what you own forms the core theme in the game. 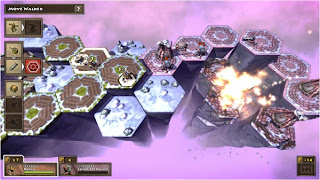 In terms of aggression, the game is simple – when conflict occurs whoever has the most units on a tile wins. There is a maximum of 16 units per tile though, so games can often result in a stalemate where neither side can make any direct inroads into opponent’s space.

Strategy plays a role then, in using the cannons (which destroy some of the soldiers, as well as lowering the tiles by one height unit), and then the (very expensive) air transport to drop units behind enemy lines. Captured tiles with harvesters and cannons turn those buildings over to your side, and there’s nothing sweeter than using your opponents own precious resources and weapons to your advantage.

That’s all there is to the game, but with difficult AI, lots of levels, and robust online play options, Greed Corp HD is well worth the tiny asking price.

There’s also the environmental message, which comes across in this game quite powerfully and is worth mentioning. Before your armies and buildings occupy hexes, they’re wonderfully lush environments with natural foliage and the like. After? Industrialised. And then the hexes, tapped for resources, crumble into nothing. It’s a poignant message that those opposed to the various carbon and sustainability measures around the world, and the climate change denialists, would do well to think about.

Digitally Downloaded poll results #7: What is the worst game you’ve enjoyed (based on metacritic?)