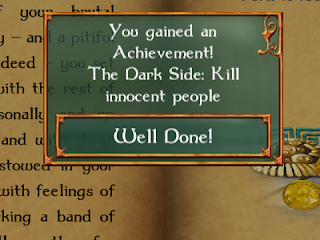 If you thought you hated spiders before…

We’ve reviewed a couple of Tin Man Games’ other Gamebook Adventures titles that the Australian developer has released to the iPad and iPhone (read them here and here), but the newest (seventh) game, Temple of the Spider God, is a big deal for the indie; the text has been penned by one of the legends of the gamebook industry, Fighting Fantasy alumni, Jonathan Green.

As the title suggests, it’s all about spiders. Evil spiders infesting exotic locations, to be precise. The adventure is filled with swashbuckling heroics, one-tone villains, the occasional spot of moral ambiguity and a touch of horror, and it’s that simple kind of fun story that is easy to kick back with. 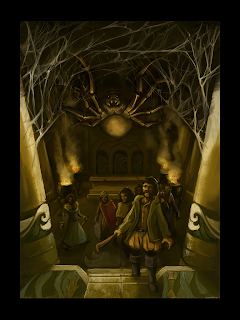 Now, the text of a Gamebook adventure is pretty important. You could say it’s even critical, so having Jonathan Green on board does immediately up the ante for the series. Where previous Gamebook Adventure titles were still well written, if a bit generic, the penmanship of Green makes for an adventure that is far more interesting to read though, which does mean it’s far more interesting to play through multiple times.

Which you’ll need to do. This breed of game is notoriously unforgiving. Combat can go against you very easily, and there are many decisions that you’ll make along the way that will lead to an instant game over. The bookmarking system allows for a range of difficulty levels, and allows some backtracking, but you’ll still want to think about the moves you make before you make them.

For anyone who hasn’t played a Choose You Own Adventure or Gamebook game before (really?) they’re beautifully simple in execution: You read a passage of text. At the end of the passage of text there are a few options on possible options to take. Each different option takes you to a different page in the book and a different passage.

In this way, adventures become nicely customised. Not every choice you make is the right one, and the books can prematurely end with your character’s death, but that’s part of the charm and challenge of these titles. 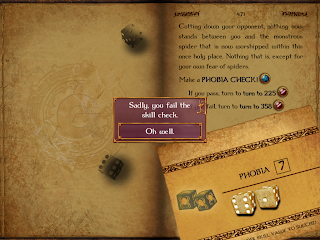 Gamebooks go one step further to break things up – they have actual combat. The combat system that is used varies from series to series. In the Gamebook Adventures series, it’s of the dice rolling variety; so a bit like single player Dungeons and Dragons. The system follows a simple rule – the better gear you have, the more dice you get to roll, the better, and there’s a bit of a risk/ reward system in place as well, as you choose to roll a dice to “test against fitness.” Succeed and you’ll get bonuses to your attack rolls. Fail and you’re in for a world of pain.

The text and combat of Temple of the Spider God is broken up by some great artwork, and there is a nice ambient soundtrack that plays over the top. There is one crucial flaw in the game’s presentation that I can’t resolve though: the virtual dice are see-through, and very difficult to see at all against the background (EDIT: The developer has contacted Digitally Downloaded to let us know this was a bug. It has since been remedied). Previous Gamebook Adventures used solid coloured dice, I’m not sure why Tin Man Games decided to go for this unfriendly approach this time around. At least the all-important text remains easy to read and uses a nice font.

It’s a minor quibble all up, though. Gamebooks are an acquired taste in a world where action is king, but for people who like classic RPG dungeon hacks, enjoy a bit of reading to go with their games, or simply get nostalgic over Fighting Fantasy and Lone Wolf, here’s another fine choice for you.

No manual in Super Mario 3D Land. Another blow to retail games.