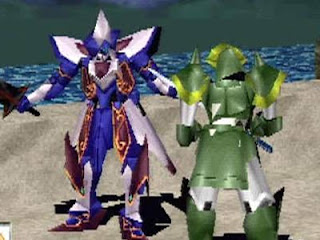 Vanguard Bandits has been forgotten by the gaming community at large. Its developer, Human Entertainment, is long gone and with it, most of its franchises.

Thank goodness for MonkeyPaw Games then, for picking up the rights and then publishing one of the forgotten tactics RPG classics. Vanguard Bandits has its fair share of rough edges, but there’s diamond in the rough.

The game’s story rushes itself through from start to finish. You play as Bastian, a young prince who is the only person that control an ultimate weapon. An evil empire wants to use Bastian towards its own ends, and in an early attack, Bastian watches his adopted father killed before his eyes.

If all this sounds a little conventional, it’s because it is. Vanguard Bandits has the kind of scripting you’d expect from a Gameloft game (ie marginally better than a bad fanfiction). Normally for an RPG this would be an instant deathblow, but because the script moves so fast, and because there are moments of levity (whether deliberate or otherwise), it’s ultimately forgivable. 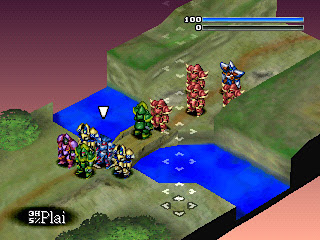 Central to this plot is the fact that on the battlefield, humans don’t fight as humans. Rather, they pilot robots (ATACs) into battle. Personally I think this was little more than a technique for explaining away how blocky the characters are in battle – being “robots” doesn’t change how they fight in any meaningful way, and indeed you’ll see centaur-shaped robots, human-shaped robots, robots with spears, robots with swords, and robots that cast magic.

But then again the visuals are so primitive that perhaps this deception is better than the alternative; at any rate it’s another forgivable rough patch to work through to get to the game’s diamonds.

To complete the poor presentation trifecta is the music and sound effects. To gauge this I use a highly scientific formula that I’ve devised; the quicker the better half tells me to turn the TV noise down, the worse the music must be. With Vanguard Bandits that happened within the first mission. So much for that. But, if the presentation of this game is so substandard (even by PlayStation standards), when presentation is usually so important to RPGs, why is it so compelling? 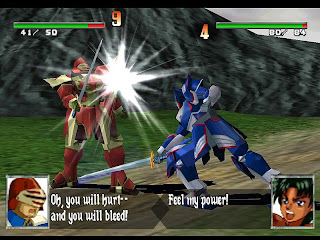 On the battlefield itself the game plays out much like a Fire Emblem or Final Fantasy Tactics. Characters take turns to move, based on their speed and the like. On its turn a unit may move and attack, or vice versa – each unit has a number of action points that determine how far the unit can move, and the power of the attacks he or she can make. Want to do a really powerful attack? Don’t move too far then.

There’s also the usual bonuses to attacking from the side or behind the enemy. Vanguard Bandit’s really original bit comes in the units being able to respond to their enemies attacks. From responding with an attack of their own, to defending to take less damage, the person in control of the unit being attacked has to think strategically on offence as well as defence.

This dynamic opens up a greater depth of tactics available to the player and, coupled with the generally high difficulty level of the game, makes for a challenging but rewarding experience; it’s fun to tweak a team that can take on any challenges ahead of it. 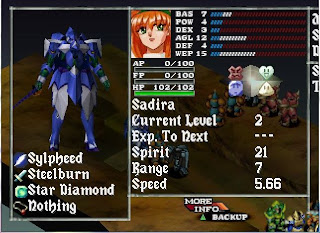 The game also is highly replayable. The story arc and eventual endings can change with each play through depending on how you perform in the game’s levels, as well as some of the decisions you make at key points. The offset to this is that each run through of Vanguard Bandits won’t last nearly as long as, say, Final Fantasy Tactics or Fire Emblem – there’s only 20 or so missions per play through.

Those missions take longer than a Fire Emblem game to play out, since enemies and heroes tend to be more resilient. One-on-one it can take as many as 10 (or more) successful attacks to down each enemy. Thankfully the game provides damage bonuses to ganging up on the enemy, so when you’ve got a single enemy swamped, he’s likely to go down quickly.

Those complexities are what makes Vangard Bandits worth playing still, for those who can look past the presentation. The game’s not for everyone, since by modern sensibilities it can fairly be considered a failure. But for fans of tactics RPGs and strategy games this is a game you might well have missed previously, and it’s quite possibly going to be your hidden find of the year. Thanks again to MonkeyPaw for taking the risks and bringing the niche and obscure to modern gamers.

Digitally Downloaded poll results #7: Do you use your consoles for non-gaming applications

Like classic Capcom music? Now available as a “CD” soundtrack