Frankly, The Sims should work as a Facebook game. The “real” game is little more than a Facebook game after all; it’s a game of daily routine, collecting virtual stuff and populating a little space with it.

What it lacked to cement itself as a Facebook game proper is that aggregating social aspect; the endless stream of “hey look, we have stuff” posts on friend’s Facebook streams, endless “gifting” of useless goods, and experience points that rank you against how much time your friends have wasted in the “game.” Enter The Sims Social.

A game borne of EA’s rather intelligent acquisition of Zynga competitor Playfish, The Sims Social does everything you’d expect from a Facebook game, and incorporates familiar Sims traits that are, frankly, addictive. Anyone who has been hooked on a Sims game before (and let’s face it, all of us have been there), will feel right at home here. Click on a guitar and the familiar action wheel will pop up, giving you the option to play around, or compose a song. 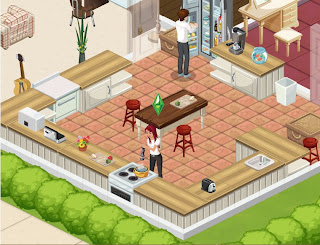 Across the bottom of the screen is a series of meters, allowing you to see whether your Sim is keeping his/ her hygiene up, is hungry, or is having much fun. Keeping those meters up involves a heck of a lot of clicking, and performing a hell of a lot of actions.

But that’s not all. Here comes a wall of text: Sims can plant vegetables and fruits in the ground outside their houses. That works just like Farmville. Sims can visit the Sims of their friends who are also playing the game. Sims can collect coins, energy points, experience points, skill points (for instance, writing a lot of emails on the computer levels up the writing ability), recipes for special items and potions, and people can spend real money to get the typical Facebook “premium” currency to buy more random stuff. There’s food to be eaten, beds to rest in and make, grass to cut, and a whole heap besides. 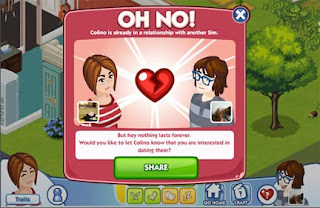 It’s a little more (emphasis on the ‘little’) here than the likes of Facebook, and The Sims elements, however light they are, do help give the game a layer of respectability.

It’ll be interesting to see if I keep playing this one three or six months from now.