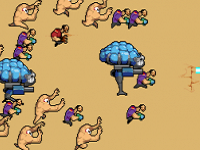 If you took the all-balls action and humour of Serious Sam, and decided to marry it with the most inappropriate genre possible, you’d be making a Serious Sam puzzle game, or an RPG. Serious Sam: The Random Encounter is the latter, and against all odds it is a really, really cool game.

I was a big fan of the PS2 Serious Sam: The Next Encounter on the PS2. It did away with silly things such as plot, music composed by Hollywood legends and any pretense of intelligence. Instead we got awesome, smooth action, bright and cheerful visuals and plenty of guns to play with.

Now imagine exactly the same thing, but using 2D NES-style RPG sprites, and you’re more or less at The Random Encounter. There’s no plot whatsoever – just “kill the next big monster.” The visuals take great delight in being cheap and tacky. The music is instantly forgettable.

What makes The Random Encounter so much fun is the combat (just as well, the game is about 95 per cent combat). It plays out somewhat like a ATB-based Final Fantasy game: Sam and his allies arrayed on one side of the screen; a horde of enemies on the other. And by horde, I really do mean horde: At once stage the enemy sprites were so numerous that I couldn’t see any ground beneath them. 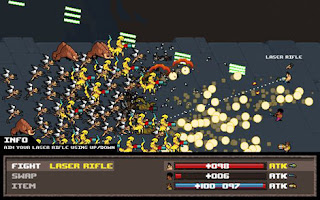 Combat works like this: Pick a hero, pick a weapon, aim the weapon. Some weapons (such as the shotgun) have a short range, but can do a lot of damage to anything that comes near. Other weapons (such as the rocket launcher) do wide area of effect damage. Still others, such as the minigun, fire in a straight line, but spray the enemy with bullets. The trajectories for the gunfire can be adjusted too, to create some lethal crossfires.

Once everyone has their weapons and trajectories chosen it’s time for the combat to start. The enemies swarm towards the heroes. The heroes shoot bullets. That’s it. It’s beautiful, really, and so very, very fast. Each combat is over in a few rounds of a few seconds, and then it’s time to gain XP, and move on. Not that this “XP” bit gets bogged down in such silliness as making you open menus. Oh no. With each level comes more loot, making the next fight easier in a rather simple, but elegant fashion.

The game’s maps each have all the trappings of an RPG adventure. There’s treasure chests to loot and random encounters to fight on the way to the big boss battle. The difference is that the maps are about the size of a typical RPG’s inn or tavern. If it wasn’t for the obscene random encounter rate (which never gets frustrating, thanks to how stupidly entertaining the combat is, and how quick it’s over), you’d be able to meander over to the boss fight in 10-20 taps of the keyboard. You’ll likely get slaughtered without a bit of grinding and treasure looking beforehand, but hey, that’s life. 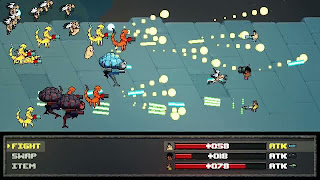 And that’s the extent of the game. I’m not going to pretend it’s especially intelligent – in fact, it’s quite possibly the dumbest game I’ve ever played – but within that stupidity there’s real charm, filled with one liners (in fact, the entire game’s dialogue is made up of one liners) and a clear love of the RPG format.

See, while Serious Sam is the lightest possible RPG you could imagine, it’s all been crafted with a love for the form, and a desire to make it simple fun that anyone – even the non RPG traditionalists – could enjoy. And Serious Sam manages that.

As such I wholeheartedly recommend this. It’s over quick, and it’s only good for short burst of play, but The Random Encounter is to RPGs what “traditional” Serious Sam games are to FPSers. Or in other words this is what would happen if The Rock found himself staring in a Lord of the Rings film. He’d tear those f’ing orcs a new one, The Rock would.