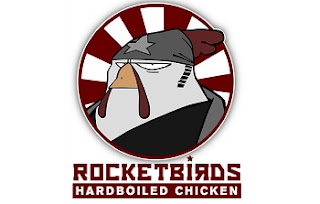 I’m not sure how many of you were counted amongst our readership back in June – it seems so long ago, now – but back when I joined the ranks of Digitally Downloaded, my first review was for Red Johnson’s Chronicles, a point-and-click adventure game that simply oozed coolness. Whether it was the smooth jazz fusion, the amazing landscape artwork or the overall artistic direction included, Red Johnson’s Chronicles remained one of the coolest titles for download on the PSN. Until now.
Ladies and gentlemen, let me introduce you to the new king of cool: Rocketbirds: Hardboiled Chicken, available to you exclusively on the PSN.

Rocketbirds is a platformer which, as a genre, admittedly conjures images of Mario and Sonic whom, while entertaining, wouldn’t be considered particularly “cool” by many people. But don’t be fooled; the platformer genre isn’t your dad’s Super Mario Bros. anymore. Gone are the days of simply jumping from block to block, trying to evade piranha plants and goombas; instead, the platformer has evolved to include such genre-bending titles like Shadow Complex, Outland and BloodRayne: Betrayal, all critical successes and all platformers that have taken the genre somewhere Mario never would have dreamt.

RAAM casts his shadow on XBL in time for the holidays