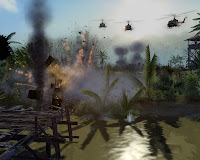 Ever play chess? On a battlefield? Then, even if you’ve never played one of 1C’s Men of War titles, you’ve played all of them.

I have had the dubious pleasure of reviewing several of the Men of War games in the past and they all have one thing in common, crushing difficulty. Sure there’s some variation here and there, but they’re pretty much all the RTS equivalent of Dark/ Demon’s Souls.

And it’s not that I’m averse to a challenge either, I don’t mind a rough and tumble experience where skill is the key to victory. But the kind of gameplay experience that MoW provides is one of relatively high frustration – and moments where you forgot to save an have to start over at the last checkpoint. Saving is the name of the game here by the way as you’ll be doing it very, very, often. Seriously, you want to win? Save every few feet.

Vietnam actually seems to have an even harder tilt than its predecessors, as impossible as that should be, since they were pretty brutal before. Developer 1C had allegedly started making the Men of War games a bit easier, but if they were, they may have thought that players needed a reminder for ‘Nam. by far, the biggest obstacle is the brush, the thick jungle foliage covers not only your movement, but your enemies’ as well. Bad guys can pop out at any given time (and usually do) to thoroughly blast you in the face. Repeatedly.

Try spinning the viewpoint around to frame the fight when you’re caught unawares in the midst of a mission – I dare you to not lose your whole squad. Seriously, it’s that hard.

Now, all the difficulty does have one good side. And that’s that it’s very realistic. In fact, if you’re of the patient type of strategy gamer, it can actually be quite satisfying too. Creeping forward through the steamy Asian jungles, foot by foot, taking aim at anything that looks odd to you, and being ready at any given moment; it’s seriously realistic stuff and can have a huge payoff at the end of a level.

The multiplayer is also solid, and is much more enjoyable than the single player experience. A good group of players taking on the ‘Cong (or anybody else for that matter) will have a much better time than the solo gamer. I’d actually go so far as to say that this should be considered a multiplay title first and foremost since it’s just so difficult for a single player.

Another stand out for Vietnam is the engine- the graphics are excellent. Everything looks good- from those jungles to the look of your men, it’s all good. The level of detailing is nothing new for series fans though, as the WW2 titles were lookers as well.

Play control is solid. Issuing orders and getting your on screen troopers to act isn’t all that hard and the menu’s are pretty easy to navigate. The only ‘oops’ here is that there are some glitchy moments where one of your guys will get stuck on something and stop whatever he’s doing. That’s fatal in MoW. I also ran into a few areas where (and I’ve seen this before in these games) my soldiers could pound a dug in section of enemies for minutes with no effect- but the opposition could do the same and cut my men into kindling. It’s annoying to say the least, but isn’t a game breaker since it doesn’t happen all the time.

And other than that, this is just a plain old ‘hard’ game. There is no learning curve (it’s a blasted grind right from the top), no real tutorial, unforgiving terrain/enemies… etc. If you like slower pacing and don’t mind taking your sweet time with a game, then there might be a lot more here than there was for me. As it stands though, Men of War: Vietnam is an apocalypse now in all the wrong ways- this one’s only for battle hardened war dogs. And even they might have a tough time of it.

Win one of five copies of indie hit, Astralia!