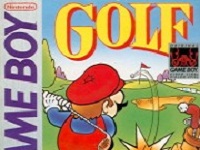 Golf on the Game Boy is much the same game as NES Open Tournament Golf, only there’s not as much content.

It still plays a reasonable enough (if primitive) game of A Good Walk Wasted, with two full courses of 18 holes to play through. The game is played from a top-down perspective, where players aim a cursor an select a club to hit the ball with.

The mechanics for the swing itself are easy, and anyone who has played a golf game before should be familiar with the three-tap system. On the bottom of the game screen is a straight ‘bar.’ Pressing the “A” button once sets a cursor off, travelling down the bar at the bottom of the screen. Pressing “A” a second time will stop the cursor in its tracks. This determines how hard you’ll be hitting the ball; the further down the track to the left of the screen that the cursor is cursor is stopped, the further the ball will travel. 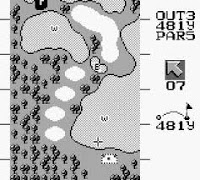 Then the cursor begins moving back to its starting point. Pressing “A” the third time determines the accuracy of the hit, with the proximity between the cursor’s end point and where it started determining how much (or little) draw or fade there is in the shot.

It takes some getting used to before you’ll be getting birdies and better. The cursor moves quite quickly along the bar, so being accurate is a challenge. Furthermore, putting, which only presents a top down view of the green covered with various arrows representing the direction and severity of the green’s undulations, is twitchy at the best of times.

It is easier than the NES Open Tournament Golf game though, as the cursor moves more slowly, making is far easier to be accurate.

Easier, but not more rewarding. There’s two courses, no multiplayer game modes, and none of the character of the game’s “big brother.” As such, it’s impossible to recommend this game to ambassadors who already have NES Open Tournament Golf, and almost as hard to recommend the game to non-ambassadors when Touch Open Golf is available off DSiWare for a few dollars more.