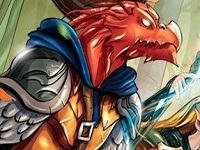 I think we can chalk this up to one of those great ironies of the gaming industry: Atari loses the license for Dungeons & Dragons, and then produces, by some considerable margin, its most honest and truthful Dungeons & Dragons experience.

And to top things off, the game I’m talking about is of all things a Facebook game. Dungeons & Dragons: Heroes of Neverwinter is the first example I’ve come across of a Facebook game that has some real sophistication, and though it’s a simplified version of Dungeons & Dragons, it actually serves as the perfect introduction to new players of the game, and a breezily entertaining diversion for the more experienced RPG players.

The game utilises the 4th edition Dungeons & Dragons ruleset, a streamlined, action-heavy take on the game that suits videogames well as it’s all about the combat. Players start off by creating a character from a variety of different classes (Rogue, Fighter, Wizard, Cleric) and races, and them get straight into the questing. 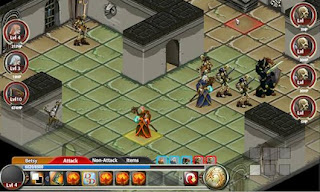 The game is light on plot (but again, this is how 4th edition was designed in the first place), with snippets of text setting the scene before and during each dungeon delve, and a small town environment acting as a hub to rest up and buy stuff between quests. The quests themselves are plentiful, and selected via an overworld map. It’s an organic and clean interface and setup that allows people to become comfortable within the game quickly.

Why this game is more than a typical Facebook game is the simple fact that it is indeed a game. Players select from one of a range of different available dungeons (more open up as experience levels get higher, and as players acquire special artifacts from previous quests), and recruit a party from fellow adventures listed in a tavern.

From there it’s a series of combat rooms, against a wide range of traditional Dungeons & Dragons beasties. The game wastes little time in flexing its muscles when it comes to the main strength of the ‘real’ Dungeons & Dragons game; the epic battle. Within three to four quests you’ll run into your first dragon, and by then you’ll likely be hooked to the game’s combat heavy but addictive structure. 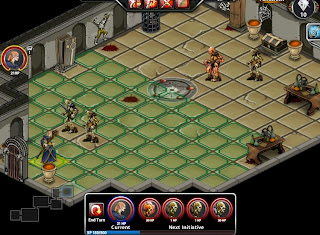 Combat plays out on a grid of squares, very much like a tactics RPG game. Each character and monster is assigned a “turn” in order, depending on a range of factors, plus a bit of random luck. When it’s that character’s turn, he can move around the field, and perform one or multiple actions. Some low powered actions are “free actions,” and can be performed without hampering the ability to use more powerful actions. Other actions can only be used once per battle, or for the really powerful ones, once per adventure.

There’s a wide range of actions that suit a character’s character class (a cleric gets plenty of healing abilities, a fighter hits hard), and new abilities are learned by levelling up. A successful party is one with a bunch of complementary skills, so, what starts as a simple monster bash-up becomes a complex and strategic play on using a party’s many and varied skills at the higher levels to overcome enemies that are, individually, much more powerful than the individual.

Sounds all like a real game, doesn’t it? That’s because it is. There’s some usual Facebook stuff, but they’re almost an afterthought; it’s possible to gift stuff to friends, and visit their virtual houses to see the look they’ve acquired. That’s neat enough. 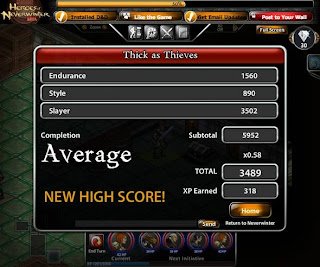 Then there’s the energy rating. Do quests, use energy. Run out of energy, take a break. That bit is less cool, since this is the kind of game that doesn’t need arbitrary restrictions to keep the game world balanced. The dungeon questing itself is perfectly playable as a solo player, and rewards loot, yes, but Blizzard doesn’t tell people they have to stop playing when they’ve been going for an hour with good reason.

And finally there is of course the premium “gems” that can be purchased with real money. For perhaps the first time in a Facebook game, though, you never feel like you’re missing out on too much if you don’t invest in those, so this is a completely understandable (it is a free game to play, after all) and reasonable premium offering.

I was pleasantly surprised with Heroes of Neverwinter, and this is likely to be the first Facebook game I keep coming back to in the weeks and months to come. The reason why? Well, to use a Steve Jobs trick, there’s one more thing. It’s possible to create your own mini adventures to challenge your friends with. That’s a really, really cool bonus that captures the Dungeons & Dragons spirit perfectly. Forget this is a Facebook game and give it a chance if you enjoy Dungeons & Dragons, or RPGs in general. It’s worth it.