If you haven’t played Bejeweled in some form by now, then it’s hard to imagine you play games at all. Like Tetris before it, this puzzler is both accessible, but addictive and well-made enough to appeal to the most hardened gamer. Getting those really top scores is a massive challenge, after all.

With that in mind, you have to wonder whether Bejeweled 3 is worth buying for the 99 per cent of gamers that already have an earlier version sitting around somewhere. It’s not that it’s a bad game by any means – it remains the most refined match-3 game out there. It’s just that there’s only so much you can do with this formula.

For the ‘other’ 1 per cent – Bejeweled is a very simple formula. There’s a grid made up of gems of various colours (and shapes, so the colour blind don’t miss out on this one). By moving gems around, the goal is to get three (or more) in a row, which will cause the linked gems to disappear, and the gems above that to drop down, setting up the potential for chain reactions. 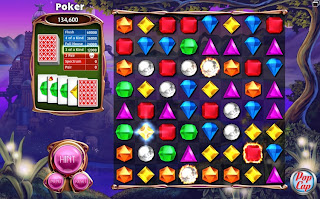 Bejeweled itself is a traditional match-3 to the point where you could consider it the factory settings of match-3 games. For Bejeweled 3, the developers have tried to spice things up to an extent. Creating especially clever gems combos causes some seriously powerful, screen clearing special powerups to pop onto the stage.

Those powerups do a good job of keeping the in-game action interesting, but not enough to morph the basic Bejeweled game into something more than stock standard match-3. Of course, developers PopCap never wanted to do that in the first place; creating an accessible match-3 game was the objective, and they continue to leave the complex variant rules and systems to the likes of Puzzle Quest instead.

That’s not to say the game is limited, though. There’s a number of different ways to play, though they’re all fairly straight forward, varying between the basic untimed game to a fast fingers version. Some are almost better than the classic game – Poker Bejeweled for instance, provides an interesting twist on the game, others fall flat and are only worth playing once or twice. With an enormous number of different game modes available, though, there’s something for everyone.

In terms of presentation, the game is what you would expect from PopCap; clean, classy and attractive. The music suits, the menus are well designed. PopCap knows better than almost anyone how to make the most accessible games even more accessible. 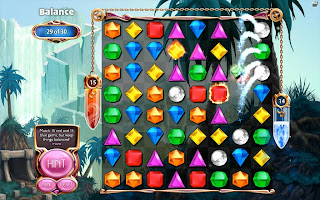 But in the end you probably already have Bejeweled somewhere. Is a visual upgrade, a few extra ways to play and a new soundtrack enough? I have a feeling this incredible game is going to run into the same problem Tetris has, that it struggles to find new ways to give people reason to buy into it.

But, if you haven’t played Bejeweled before, this is a must have – there’s plenty of content and the high-score hunting action is as addictive as they come. If you’re a massive fan of the previous games in the series, rest assured that this new game doesn’t get anything wrong.

The only other question then is mouse, controller or touch screen controls, since this game’s on every platform known to man. That’s entirely down to preference, as they all work fine, though personally I do rather like playing these games with a controller.