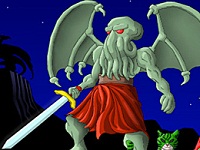 Robert Boyd and his indie outfit, Zeboyd, managed to turn the one and only Cthulhu into a hero in the XBLA Indie Games and Steam hit, Cthulhu Saves the World.

We’re still not quite sure how that happened, but we’re glad it did. As he hatches up Zeboyd’s next masterpiece, Boyd sat down with Digitally Downloaded to discuss game design and being an indie developer.

DD: To get the big question out of the way first: RPGs are notorious in that they take a lot of time and people to make a 40 hour game, as opposed to a 4 hour platformer. How do you manage to make RPGs as an independent developer?

Robert Boyd (RB): RPGs are known for usually being massive games, but they don’t have to be. When Bill Stiernberg and I first teamed up to make Breath of Death VII, we knew we didn’t have the resources or the experience to make a huge game so we intentionally set out to make a short and sweet game. We also tried to focus on the aspects that mattered most to fun (like pacing, story, and combat) and not get distracted by periphery details that would have eaten up too much of our time.

DD: What’s the creative process you go through when making your games?

RB: When I’m bored or have a free minute, I try to come up with new game ideas or expand upon ideas that I’ve already had. Most of these ideas aren’t quite there so I’ll discard them or set them aside since you never know when a new idea will be the missing key that an old idea needed to flourish. When I have an idea that I think is especially good, then I’ll write up the details so I have a record that I can go back to when I have the time to work on it.

This way, I’m never at a loss for ideas to fill new projects with.

DD: Are RPGs difficult to market, once they’re done and ready for people to play? After all, the gaming industry seems to be all about those Call of Duty clones these days.

RB: If anything, I think RPGs are easier to market since there are fewer of them being made these days. How many big name shooters can you think of that have come out or will come out this year? I can easily come up with half a dozen just off the top of my head. How many big name turn-based RPGs can you think of that came out this year? The only one that comes to mind is the most recent Pokemon game. Even if you expand the question to include all types of RPGs, the list isn’t long – you’ve got the new Deus Ex, Dragon Age 2, The Witcher 2, Dead Island, the new Elder Scrolls, and Dark Souls and that’s about it for big name RPGs this year (and big name might be a misnomer since some of those are more along the lines of cult classics). Because there are fewer big titles coming out, the RPG genre is ideal for smaller companies and indie developers to find success.

However, marketing in general tends to be very difficult for indie developers because we don’t have the funds to create huge marketing campaigns and we don’t have the clout to demand the attention of the big sites. What generally happens with us is that I’ll create a press release and press pack whenever we have a big announcement to announce and I’ll send it out to a bunch of press email address. We have a good relations with a few sites that I can count on to report on us, but for the most part, it’s a lottery – will we get lucky and get picked up by a huge site that will spread throughout the Internet? You never know.

DD: Your games are available on Steam, but we love playing our RPGs on consoles and iOS devices too. Any plans to broaden out past the PC market?

RB: We’re a small company so we don’t want to spread ourselves too thin, but we are continuing to support the Xbox 360 via the XBox Live Indie Games service and we’re looking into the possibility of smartphone ports of our titles.

DD: What advice would you have for other aspiring indie game developers?

RB: Don’t run before you learn how to walk. I wanted to make RPGs so I started out with text-based games (Molly the Were-Zompire), then moved on to a simple 8-bit style RPG (Breath of Death VII), then a more complex 16-bit style one (Cthulhu Saves the World) and so on. By doing simpler projects at first, you gain the fundamentals you need to successfully complete more complex projects. Also, there’s a great boost to confidence when you actually finish a project which is much more likely if you don’t start out with something that’s too ambitious for your current skill level.

DD: When you’re not developing games, what are you playing? If we do the old “stuck on an island and you will only ever play three games again, which three would they be,” how would you answer?

RB: I’m currently focused on Dark Souls which I’m finding to be an amazing game and just what I’ve been in the mood for. If I had to choose three games for all time, I’d go with Civilization V for my open ended strategy game, Pac-Man: Championship Edition DX for my arcadey score attack desires, and a hack & slash or roguelike for my RPG

DD: Finally: What will we see from Zeboyd next?

RB: We’re currently working on Penny Arcade Adventures episode 3. After that (and PAA4 if the demand is there), we have a number of potential projects that we’re considering. I think I might like to take a brief break from RPGs at that point and maybe work on a game in a different genre (like a Civilization style game but with a post-zombie apocalypse setting), but that’s still a ways off so who knows?

Make sure you check out Cthulhu Saves the World if you haven’t already.