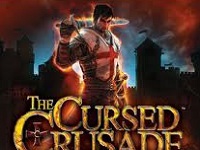 Last week, a demo for The Cursed Crusade popped up on various online networks across North America. I figured, because I might not get a chance to review the actual title, I’d put together a few thoughts about the demo for you all to muddle over. But before we get to that, let me explain something:

I’m a sucker for co-op games, especially what I like to call “couch co-op games”, games that support local cooperative play. There’s something about sitting down with a friend, pulling up a co-op game and wasting away the whole day playing through the game. With one friend in particular, I’ve played through a number of games in a single sitting, including (but not limited to) stuff like both Army of Two games, Resident Evil 5, Terminator: Salvation, Hunted: The Demon’s Forge and the entire Gears of War series; no matter how good the game is, it’s always better with a friend.

So when I first heard about The Cursed Crusade, it piqued my interest. For one, as a game designed around cooperative play, it immediately joined the ranks of a shrinking minority of games that I hold very near and dear. For two, the setting for The Cursed Crusade is the Crusades, a period of time I consider rife with untapped potential. Based solely on those two points, The Cursed Crusade jumped very high on my list of anticipated titles – and the fact that it was to be offered at a cheaper price point than most retail games ($40US as opposed to the industry standard $60US) certainly didn’t do much to dissuade me.