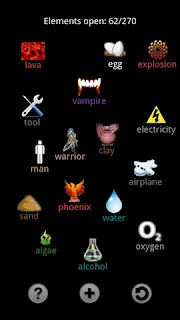 If you are the kind of person that loves a game where you can stop playing in the blink of an eye and start up right where you left off them you can sometimes be let down by phone games. Taking the time to finish a level or save a game can be impractical when you are on the go or you could just let the game run in the background and chew through precious battery power unsure of when you might start playing again. Fortunately with Alchemy you won’t have any of these troubles since it is as simple as quitting and everything will be right as you left it when you come back.

The thing that makes this game fun is it’s pop culture references and at times quite humourous results. The game doesn’t have a heck of a lot of depth but there is a tally at the top of the screen urging you to discover all the elements up to the total of 380 which will definitely take some time.

This game wont be for everyone; it doesn’t require any skill to play the game. You simply slide one element over another and see if anything happens it is this quality which actually makes it a good game for all ages though. Kids might learn a little bit of the basic ideas behind chemistry from it which is never a bad thing but at the same time, it’s no textbook; lots of elements have nothing to do with the ones you used to create them. 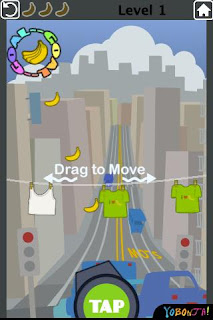 Far and away one of the best games I have played on a phone, Blast Monkeys provides you with such an extensive range of levels to complete that you will be kept busy for hours and hours.

In some way this game is a lot like Angry Birds. It has a lot of concise levels that can be completed in one minute or less. It requires you to fire an animal to attain a certain goal and it requires a little bit of strategy.

In this puzzle game you shoot a monkey’s head out of a cannon and bounce it off walls in such a way that he collects all three bananas and reaches the goal. It starts out with a static level with solid walls but later levels introduce more challenging obstacles such as spike traps, lifts, air vents, bubbles and cogs.

At present there is 30 levels per world and seven worlds to choose from. Updates are common though, adding additional world choices and new challenges. Unlocking the next world requires monkey coins which are earned by completing levels and collecting bananas.

The game plays very well with tap to fire controls on the cannon. It can occasionally frustrate when bubbles don’t pop when you want them to but that is more to do with how precise you have to be with the controls than a control fault. What the game lacks in graphics it makes up for in content and fun challenge.

If you don’t have this game already then do yourself a favour and pick it up, it’s free and it’s awesome.