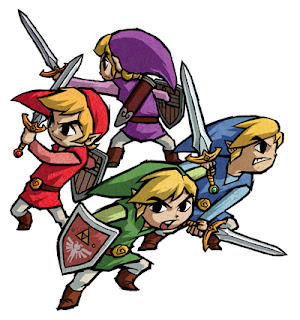 We’ve known since June at Nintendo’s e3 conference that we would be seeing Link’s multiplayer outing in September, but fans now have a date to look forward to. On September 28th, those in Europe and North America will be able to download the game for free – but there’s good news and bad news.

The biggest announcement by far is that a single player mode is now available. One player can control the Links via several control options, so there’s no need for a friend. The original release on the Game Boy Advance only offered a multiplayer mode, so now everyone can scratch this off their “games I want to beat, but can’t” list.

In addition to the levels featured in the original, there will be several new areas, as well as new items, unlockable abilities like the hurricane spin, and new game modes. It’s not inaccurate to think that this will be a much meatier adventure than before.

So what’s the bad news? The game will be gone on from both the eShop and the DSiWare stores on February 20th, so you’d better download it while you can in the next few months. There’s also no online multiplayer, but you can still play with any local DSi/3DS users near you.

Regardless, this remake is looking to be one of Nintendo’s more promising downloadable titles. We’ll have a full review later this month.

Digitally Downloaded poll results #3: What genres of games do you enjoy most?