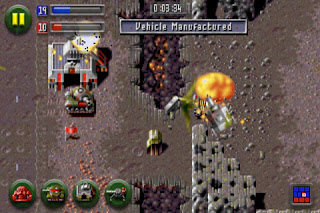 It was inevitable that the classic games we used to play as children would be brought over to the new formats available to us today, namely the iOS platform. Z The Game is essentially a direct port of the original PC version simply called Z, but needed to be renamed because iTunes won’t allow apps to be named by single letters. This real-time strategy game from the Bitmap Brothers was never really considered the best of its time, but it did have a lot of character. It was quirky and different, but most importantly, it was hell of a lot of fun. So how does it translate into the world of touch-screen mobile gaming?
For those who have never heard of this title, Z The Game is a real-time strategy set in space that pits two sets of robots (yours are red and your opponent’s are blue) against each other on a map to see who can destroy each others’ fort. There are 20 stages in total ranging across five different planets, all with unique terrain, though they do essentially play out the same way. At the start of the stage you are given control of your fort and a handful of infantrymen who you must use to capture other areas of the map, which has been segmented for your convenience. Capturing the flag in any segment of map gives you control of that area, as well as control of any unit-producing factories contained within it. Ultimately, your aim is to send a unit into your opponent’s fort or shoot it to bits, either way ending the stage. 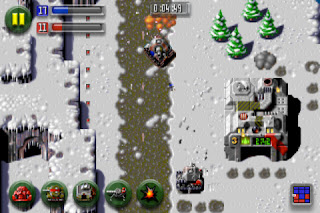 Unlike most RTS games, there is no need to harvest wood, mine for gold, or sacrifice goats to build units; simply be the owner of the factories and wait for them to build what you need. Some factories can build multiple units so you have some say in what you would like built, but generally speaking you simply need to wait for the relevant amount of time and one of the six available units will be created. Also, the more map areas you control, the faster your units will be built. Unfortunately, the only units you really need are tanks though, as they can pretty much sweep out anything in their path which relegates your other units to wandering around and securing the various flags, gun turrets, vehicles and factories.
Z The Game is an exact replica of the PC version and, as such, it brings with it all the graphics, sounds and gameplay that we all know and love. Unfortunately, it also exposes some issues regarding porting PC games to the iOS. The biggest issue with the game is the user interface; controlling your units is annoyingly difficult because of the touch screen. Multiple problems such as accidentally selecting a destination for your unit as you scroll the map, having units get stuck behind terrain, and having to re-select units repeatedly every time you want to slightly adjust their route are all related to the touch screen and the fiddly nature of attempting to control many units on a small screen. The more you play, the more you get used to it and the better you get at utilising the mini-map, but Z The Game constantly reminds you of its clunkiness and this detracts from the overall feel of the game. Another issue, as mentioned before, is the fact that the game isn’t all that difficult if you can gain control of tanks. A small group of these units can drill a quick path to the enemy Fort and makes most of your other units redundant. 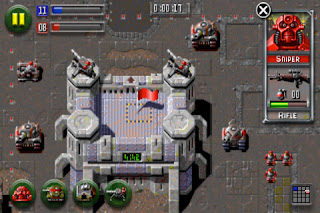 Overall, Z The Game is one of those classic retro games that will warm the hearts of those who played and loved it 15 years ago. On the other hand, if you’re not a fan of RTS games, then Z The Game is probably not the best example of the genre. Combined with the fact that the controls don’t translate particularly well to the iOS touch-screen and the game is relatively expensive, this one might be worth passing up unless you’re especially interested in what you’ve read.